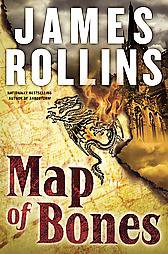 Map of Bones by James Rollins - "Hooded men invade midnight mass at the Cologne Cathedral and slaughter almost everyone present, then break open a gold sarcophagus and steal... the bones of the Three Wise Men. Grayson Pierce, top agent in the Department of Defense's covert Sigma Force, takes a team to Rome, joins up with love-interest Rachel Verona, a carabinieri corps lieutenant, and her Vatican official uncle, Vigot. It seems that the Dragon Court, a medieval alchemical cult-cell that still operates within the Catholic Church, is to blame, and it also seems that the bones of the Magi aren't really bones, but the highly reactive Monatomic gold that the group plans to use to accomplish its ultimate goal—Armegeddon."*
This book is very Da Vinci Codish which is not a bad thing. The action is fast paced and the characters are likable. Unlike his last book (Sandstorm) I enjoyed this one alot. I understand he is going to write more Sigma Force novels. That sounds good but I can't help thinking that the Sigma Force crew bear a striking resemblance to Matthew Reilly's Scarecrow and company. Seems there's a lot of similiar ideas floating around. I'm so glad authors don't copy one another. (ha!)
* Description from Publisher's Weekly
Posted by What Would Jesus Glue? at 2:25 PM