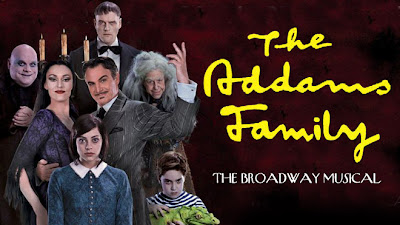 I thought I would jot a brief review of the Addams Family musical that we saw at the 5th Ave. Theatre on Sunday. Sarah and I were both disappointed in the show. We felt that they missed the boat in capturing the spirit of the Addams Family. I'll address my concerns via bullet points. Spoiler Alert!
- The story was weak. Very shallow.
- The music was fine but, in the end, not memorable.
- Uncle Fester was wasted as a narrator. He had a brief storyline connected to him about being in love with the moon. Stupid.
- Morticia was more like Lily Munster with her cleavage cut to her belly button. The actress was too buxom for Morticia. She was also too animated, not morose enough. When she hiked up her skirt to tango, it didn't feel right. Morticia has always danced just fine in her too tight at the ankles skirt. I can imagine that Bebe Neuwirth probably fit the part physically better than this actress did.
- Grandmama was fine. It bothered me that they kept referring to her as grandma.
- Wednesday wasn't morose enough. In the story she is struggling w/ her dark nature vs. being in love. The dark nature wasn't showcased strongly enough.
- Pugsley was fine. He never has been a strong character anyway.
- Lurch had a couple of fun moments but I felt like they missed some opportunities with him. How about a harpsichord number just for him?
- Gomez stayed pretty true to character. I feel like he was the closest to spirit of the Addams Family. I wish he had been a stronger singer. Uncle Fester's pipes outshined Gomez by leaps and bounds.
- The set was lackluster. The graveyard/gate set was fine but I was really looking forward to when they got to the house. I was so disappointed. The house set was boring. No fun props.
- Thing showed up for one bit. Blink and it was over. Thing is a huge part of the Addams Family and he was hardly in it. The set could have had many fun ways for him to show up but they just didn't do it.
- The ancestor ghost chorus was fine but I think their costumes/characters could have been kookier. The closest they came was having a criminal in the mix. All the Addams ancestors were fiends. They should have looked the part.
- Cousin It had a brief bit. It was cute but he could have been used more as well.
So, all in all, a disappointing show considering the high expectations I had for it. As a big fan of the original cartoons, the 60's show and the movies, I can't recommend this show. It just felt like they didn't live up to the true spirit of the Addams Family. What a shame.
Posted by What Would Jesus Glue? at 3:01 PM No comments:

Yesterday was my 50th birthday. I don't feel 50...in my head anyway. Sometimes my body feels it and more. But I'm still pretty young at heart for a curmudgeon of epic proportions. Here's a rundown of the day's activities.
I took the day off of work. We slept in, went to lunch at Five Guys and then hit a couple new (to us) antique stores downtown. They were meh. We then drove north, stopped at Shake 'n Go for a chocolate malt and headed to another antique mall we like in Edmonds. Score! I found 2 more ornaments (Hulk and Batman on the Batcycle) for the Marty Tree. I also bought a stack of old comic books. We left there and raced over to Richmond Beach for the sunset. Beautiful!
We went home to rest up a bit. Watched an episode of Castle and then got ready for the party.
The big 50 party was held at the Rickshaw Restaurant and Lounge. We reserved the big room on the side. About 50 people showed up! Amazing and overwhelming! We had a great time. I got some incredible gifts. I have some very generous friends. The cake was amazing, too. My friend Heather went over and above.
At 9pm the karaoke started and we had a blast! I was serenaded by an Ape singing Bill Withers, a rendition of "All That Jazz", "Crazy", "I'm A Believer", "Your Own Personal Jesus" and many more. I dueted to "Don't Go Breakin' My Heart" and "I Got You, Babe" and "Rainbow Connection." I headbanged to "Bohemian Rhapsody" and I killed on "White Room." Seriously, I can't remember the last time I had that much fun. I think everybody had a great time. It was a spectacular night. Makes me wish I could turn 50 more often.
I learned a lot last night as well. I learned that I have many friends here in the PNW and that they think I'm a pretty okay guy. I get down on myself quite a lot and it was a great pick me up to be celebrated in that way. Whenever I get down I'm going to try and push my mind back to that party or all the other good times I've spent with friends.
I also learned (although I already knew it) that I have an awesome wife. She threw the party for me and did a great job! Even though she doesn't karaoke, she let me have a good time and celebrated with me. I take her for granted a lot but I'm nothing without her. I love you, baby! 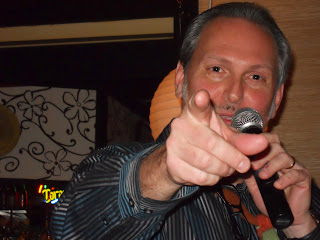 Click the header to go to FB to see the album of photos from the night. They're fun!
Posted by What Would Jesus Glue? at 4:01 PM No comments:

I'm back to recording my books read. I'm starting w/ only what I've read so far in 2012 so I can keep up with the year. My goal is to read at least 1 book a week. I'm a bit of a slow reader.


A Fine Dark Line by Joe R. Lansdale
A pretty good southern gothic coming-of-age tale about a boy who investigates a decades old murder. Not as good as his The Bottoms but worth a read.


All Earth, Thrown to the Sky by Joe R. Lansdale
Another southern gothic story. It's a genre I like. This story centers on 3 orphans trying to escape the Dustbowl and a couple of gangsters. I enjoyed it for what it was.


Gilliam on Gilliam by Terry Gilliam
A biography/interview with one of my favorite directors. Although his work of late has been lacking, I count Brazil, The Adventures of Baron Munchausen, Time Bandits and The Fisher King as some of my favorite films. This book is an insight into his early career. It bogs down a bit in places but an interesting read nonetheless.


The Thirteen Hallows by Michael Scott
I read a couple of other books by Scott (Vampires of Hollywood, The Alchemyst) and liked them so I thought I'd give this new one a try. It's not as good as the others. The story stayed fairly shallow. By the end of the book it felt like not enough had happened to get the story to the end.

Ape House by Sara Gruen
An inconsistently good story about some Bonobo apes who are kidnapped and used as fodder for a reality show. The human characters stories jumped around a lot. It seemed scattershot. The main story of the apes triumphed over those flaws and I really liked it.
Posted by What Would Jesus Glue? at 2:27 PM No comments:

I'm reading a Terry Gilliam biography/interview. I'm only on page 69 but I'm enjoying it very much. I've admired him since watching his animations on Monty Python and am a big fan of some of his films. (Time Bandits, The Fisher King, Brazil) Here are a few quotes I've gleaned from the book so far. I'm sure I'll share more as I get into the book. I've really resonated with a lot of what he's said so far.

On becoming successful as an artist:
"I think most artists are driven by a feeling of frustration, and so for the first part of your career you're railing against the establishment because you don't belong. Then, if you become successful, you're in a tricky situation: do you continue railing even though you're living in a nice house with a nice family and everything? I mean, what have I got to complain about? Not a thing, so what am I railing about? Yet I'm still angry and still frustrated. So what am I looking for? Trying to clear the shit away to find out what the truth is and what reality is."

On being part of the church when he was younger:
"But in the end I couldn't stand the fact that nobody felt able to laugh at God. Hold on a minute, I said, what kind of God is this that can't take my feeble jokes? It was the sanctimoniousness and, ultimately, the narrowmindedness of the people who were protecting this deity that I never thought needed any protection. Their God was a much smaller God than I was thinking of - less powerful - and he needed them to protect him."

On being normal:
"When I was a kid, I always thought everyone else was so interesting, but I was just incredibly normal. It used to drive me crazy. I felt I had to suffer if I was ever going to be an artist. Maybe it was the religious side again, feeling you had to go through a lot of pain and strip away the outside to lay bare the soul. Anyway, other people seemed to have it, but I was just nice, good company."

"Cutting out images was such a freeing experience. Before, I'd had to draw everything and I'd get so precious about my own work. Now I could cut out other people's things and chop and change them. Why should I spend time learning to draw like Albrecht Durer when I could just cut out his best stuff and make it do what I wanted?"
Posted by What Would Jesus Glue? at 2:45 PM No comments: