Ghost of a Chance by Simon R. Green - I love Green's Nightside series but this new series starts badly for me. Slow pace + uninteresting characters = bad. I may give it one more book since I didn't like the first Nightside book but love the rest of the series.

The Gates by John Connolly - This book was fun and even though the story was only an inch deep, it was well-written.

Essential Marvel Team-Up: Volume 3 - Enjoyed re-reading some of my faves from childhood especially the stories drawn by John Byrne.

Essential Werewolf by Night: Volumes 1 & 2 - Again, re-reading stuff I loved as a kid. This one doesn't hold up as well.

Essential Fantastic Four: Volumes 1, 2 & 3 - I bought these at Comicon because they were dirt cheap and collect the classic stories by Stan Lee and Jack Kirby. Fun stuff.

Begat: The King James Bible and the English Language by David Crystal - I only made it halfway thru this. It was interesting but very, very dry. I was hoping it would inspire some new collages but...it didn't.
Posted by What Would Jesus Glue? at 4:27 PM No comments: 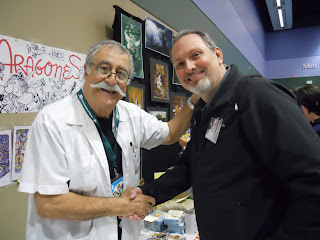 Sarah and I attended the Seattle Comicon on Friday and Sunday. I had to work on Saturday. Unfortunately, the best costumes are on Saturday so we missed some of the fun. We had a good time nonetheless. Here are the highlights.

- I met one of my art heroes, Sergio Aragones, of Mad Magazine fame. I've been a fan of his work since I was a kid. I bought a book from him which he signed. He also signed some of my Mad paperbacks that I've had since the 70's.

- I had my picture taken with Phoenix Jones, the Guardian of Seattle. He and his buddies, the Rain City Superhero Squad, patrol the streets of Seattle and try to help out.

- We attended 3 panels. Bruce Boxleitner (Tron, Babylon 5) was quite funny. John Noble (Fringe, Lord of the Rings) was very polite, courteous and had many wonderful stories to tell. Brent Spiner (Data from Star Trek: TNG) was hilarious! His Patrick Stewart impression is amazing. At one point, folks in the audience prodded him to call Big Bang Theory and ask to be on the show. He said he wouldn't because you should be asked not called and beg to be on. I yelled out for him to call and pretend he's Patrick. That sparked a hilarious bit where he pretended to call the show as Patrick Stewart. Very funny.

- I got comics signed by Sergio Aragones, Mike Mignola (Hellboy), Bruce Timm (Batman: The Animated Series), Humberto Ramos (Crimson, Impulse), and Erik Larsen (Savage Dragon). Most were nice. Some were very dismissive. I've got to say, if you can't have a good attitude with the fans then don't attend.

- Ran into our friend Ivy as she was about to be fitted for vampire fangs. We saw her later with her new fangs. They look fantastic. I may get a pair next year.

- A very talented young man named Seth was dressed as Tennant's Doctor Who. He made his own costume which impressed Sarah greatly.

- I took advantage of the great sales and bought a bunch of trade paperbacks. I'll have to take more money next year. I could have spent double what I took.

Well, that's all I can think of right now. It was great fun and I can't wait 'til next year. I hope I can go on Saturday in 2012. It'll be the 10th Anniversary for the con. Should be spectacular. In the meantime, go here enjoy my photos on Facebook.
Posted by What Would Jesus Glue? at 1:00 PM 2 comments: