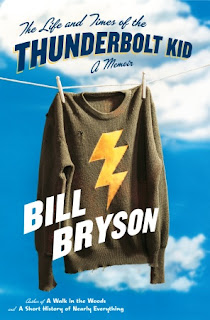 The Life and Times of the Thunderbolt Kid: A Memoir by Bill Bryson
This book is travel writer Bill Bryson's love letter to growing up in Des Moines, Iowa in the 1950's. Through good times and bad, Bryson recalls a time of innocence and the loss thereof.
It's no secret that I enjoy a good coming-of-age story. Many of my favorite books are tales of that rocky, blurry period when a child begins to become an adult. This book is non-fiction but it's tales of love and loss are just as powerful as those in a well crafted fiction account. Byson's sense of humor is astounding. Since I read at bedtime, I refrained from laughing out loud so as not to disturb my wife...but I wanted to many times. The exploits of Bryson and his childhood buddies put mine to shame. (if they indeed did all he said) I nearly couldn't contain myself during the story of the confetti bomb. Funny stuff.
There's a good balance in the book though. Bryson balances the fun stories with the realities of the time. He throws in more than enough examples of racial atrocity, communist witch hunts, and atomic age fear to keep you from thinking the 50's were a wonderland of candy coated bliss.
I highly recommend this book for anyone who wants to remember their childhood fondly or wants to contrast the world of yesterday to the world of today. This book is a time capsule and, at least for me, I think it shows more about what we've lost than what we've gained.
Posted by What Would Jesus Glue? at 8:56 AM