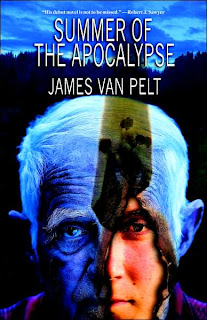 Summer of the Apocalypse by James Van Pelt
When a plague wipes out most of humanity, fifteen-year-old Eric sets out to find his father. Sixty years later, Eric starts another long journey in an America that has long since quit resembling our own, but there are shadows everywhere. Shadows of what the world once was, and shadows from Eric's past. Blood bandits, wolves, fire, feral children, and an insane militia are only a few of the problems Eric faces. Set in Denver, Colorado and the western foothills, Van Pelt's first novel is both a coming-of-age tale, and a story of an old man's search for hope in the midst of disaster. Eric's two adventures lead him through a slice of modern America and into the depths of one man's heart.
I liked this book. The switching back and forth from 15-year-old Eric (at the beginning of the apocalypse) to 75-year-old Eric worked very well. I should say more but I waited too long after reading the book to post a review. It's not fresh on my mind. Sorry.

The Taking by Dean Koontz
The new thriller from Dean Koontz is a novel of surpassing suspense and visceral terror as doomsday dawns. On the morning that will mark the end of the world they have known, Molly and Niel Sloan awaken to the drumbeat of rain. It has haunted their dreams through the night, and now they find an eerily luminous and golden downpour that drenches their small Californian mountain town. As hours pass they hear news of extreme weather phenomena across the globe. An obscuring fog turns once familiar streets into a ghostly labyrinth. By evening, the town has lost all communication with the outside world. First TV and radio go dead, then the Internet and phone lines. The young couple gathers together with some neighbours, sensing a threat they cannot identify or even imagine. The night brings strange noises, and mysterious lights drift among the trees. The rain diminishes with the dawn but a moody grey-purple twilight prevails. Within the misty gloom the small band will encounter something that reveals in a terrifying instant what is happening to the world -- something that is hunting them with ruthless efficiency. Epic in scope, searingly intimate and immediate in its perspective, The Taking is a story of a strangely changed and changing world as apocalypse comes to Main Street.
So, as you can see, I like post-apocalyptic fiction. I just happened upon this book at the library because I had nothing else to read. For me, Koontz has always been a win/lose situation. I either like his books or I don't. This one started out great. Very mysterious, suspenseful and scary. By the middle of the book it was starting to fall apart for me and by the end I was just skimming to get thru it. This book does make me wonder what Koontz's religious views are. I won't say why in case you want to read it.

Atomic Robo by Brian Clevinger and artist Scott Wegener
I picked this graphic novel up on a whim at the library. I like the art very much and the stories are fun. Atomic Robo is a robot-adventurer. To me, he's a cross between Indiana Jones and Hellboy in personality. Fun book.
Posted by What Would Jesus Glue? at 9:33 PM