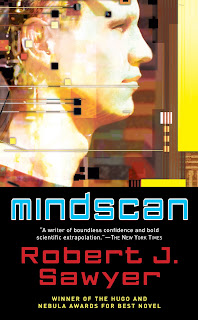 Mindscan by Robert J. Sawyer
Jake Sullivan has cheated death: he's discarded his doomed biological body and copied his consciousness into an android form. The new Jake soon finds love, something that eluded him when he was encased in flesh: he falls for the android version of Karen, a woman rediscovering all the joys of life now that she's no longer constrained by a worn-out body either. But suddenly Karen's son sues her, claiming that by uploading into an immortal body, she has done him out of his inheritance. Even worse, the original version of Jake, consigned to die on the far side of the moon, has taken hostages there, demanding the return of his rights of personhood. In the courtroom and on the lunar surface, the future of uploaded humanity hangs in the balance.
Like many of Sawyer's other books, I really enjoyed this. It's true that sometimes the science is a bit over my head but Sawyer never let's science overshadow story or character. And boy, Sawyer's stories almost always make you think and this was no exception.

Invincible by Robert Kirkman and Cory Walker
Invincible is the teenaged son of Omni-Man, an extraterrestrial superhero of the Vilitrumite race, recently revealed to be more than he seems. Invincible inherited his father’s superhuman strength and ability to fly and he has sworn to protect the Earth. He has had trouble adjusting to his newfound powers and coping with the reality of his origins.
I grabbed this at the library before I had to hop on the bus to go pick up the jeep. I finished it on the ride there. It was an okay story with okay art. The art could be much improved if they got an accomplished inker to work on it. The basics are there. I guess I just don't like the way the artist finishes his art. Story-wise, a couple of things bothered me. First, how matter-of-fact everyone is about everything. Second is how easily every problem got wrapped up. I suppose this is the way it was designed. It was a nice diversion...nothing more.
Posted by What Would Jesus Glue? at 3:51 PM