The Monstrumologist by Rick Yancey - This first book in a new YA series (although it was very intense for a YA book) centers around a scientist who concentrates on the study of monsters and his young ward. The story is set in 1888 when an infestation of anthopophagi (cannibalistic, headless monsters) hit American soil. The book started slow but I enjoyed it. The tone is dark and suspenseful. The book is very graphic and it shocked me to learn that it was a YA novel.

X-Men: First Class - Knights of Hykon - These X-books, set in the timeline when Claremont, Cockrum, and Byrne were working their magic with Marvel's mutants, are very enjoyable. The stories are very reminiscent of that time period. If only we could get Claremont, Byrne and Austin to return to the book. That would be incredible.

Tomorrow, When the War Began by John Marsden - Australia is invaded by a foreign power and a group of teenagers wage guerilla warfare to survive. Sounds like an Aussie version of Red Dawn, doesn't it? It's a YA series and I didn't enjoy the first book enough to continue.
Posted by What Would Jesus Glue? at 4:45 PM No comments:

Wow. I don't blog much anymore. I guess you can blame that on Facebook. Since there are 500-some-odd people following me on there, I don't feel the need to share too much on a blog that gets only a few hits a day. Facebook has been great for connecting to long-lost friends and keeping people up-to-date on my art career. What isn't so great about it is that I have to censor myself quite a bit. There are people I'm friends with that probably wouldn't appreciate some of my thoughts and feelings. I guess that's my fault. I should have been more choosy about who I friend on FB. But it's also good in a way. When I find myself wanting to be nitpicky and mean about something someone said on FB, I hold my tongue. There's no sense alienating every person I know on the planet just because I don't agree with their theology, politics or the fact that they can't spell.
So, I will continue to bite my tongue and keep the peace as I'm sure they are doing with me. I'll just keep ranting in my art where only a few can understand.
Posted by What Would Jesus Glue? at 1:36 PM 4 comments:

I like doing these mini reviews better than the long, boring ones I was doing. So, I'm going to keep it up. In case you're wondering why I'm reading so many graphic novels, it's because a) I like them for the most part and b) I can't find any regular books to read that I like. Got any suggestions?

Kick-Ass by Mark Millar and John Romita Jr. - The movie is better than the comic. I've never been a big fan of JRJR's artwork.

Percy Jackson and the Sea of Monsters by Rick Riordan - These books are entertaining but very shallow when it comes to story and character. It's going to be awhile before we see another YA series that's as good as Harry Potter.

Welcome to Tranquility: Vol. 1 & 2 by Gail Simone and Neil Googe - It's about the fictional town of Tranquility, CA which is home to retired superheroes. Interesting premise (I understand there is a book by Stephen King that's similar) and good artwork. I liked it.

The Avengers: Nights of Wundagore by David Michelinie and John Byrne - This originally saw print in 1979 so I read it when I was in high school. I'm a huge fan of Byrne but didn't remember that they let Klaus Jansen ink his pencils. Jansen's inks are too dark for Byrne's work. The story is interesting though because it's the beginning of finding out that the Scarlet Witch and Quicksilver are Magneto's kids. Lots of crossover with X-Men back then...you know...when you could keep up with all the storylines because there weren't 1000 books per character being published per month.

Preacher: Ancient History by Garth Ennis, Steve Pugh, Carlos Ezquerra. - This book presented back stories of existing characters. Interesting to see the origin of the Saint of Killers and Arseface but the other story was crap. I didn't like Pugh's art at all but Ezquerra was all right. I'm ready to get back to the regular storyline.

Preacher: Dixie Fried by Garth Ennis and Steve Dillon - More weirdness but back to the regular storyline. I'm going to keep going.

Uncanny X-Men: First Class/Hated and Feared by various writers and artists - I liked this. It hearkens back to the days when Claremont, Cockrum and Byrne were working their magic with Marvel's mutants. It's too bad we can't have Claremont, Byrne and Austin back to do some new stories. That would be something.
Posted by What Would Jesus Glue? at 12:26 PM No comments: 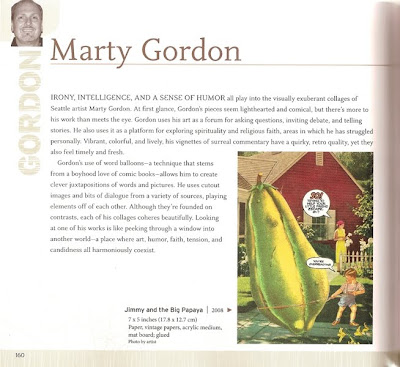 The book is officially published as of today. Here's the first of eight pages about me. At the suggestion of a friend, I think I will buy an extra book, pull the pages out and lay them flat for a high quality scan.
Anywho, still pretty exciting in an odd way. While it's way cool to be featured in a book, I'll be curious to see if this does anything to boost me into bigger and better things. Meanwhile, buy a book or better yet, buy one of my originals. Or both.
Posted by What Would Jesus Glue? at 4:21 PM 4 comments: