I had a very unfortunate encounter yesterday. I went to a gallery to pick up art and as I was leaving a very nice person complimented me on my art. Another artist was nearby and they quickly jumped into the conversation when I mentioned that my website is WhatWouldJesusGlue.com. She barely glanced at my work and then launched into a lecture/explanation of her work that I didn't really want to hear. I was brushed aside so that she could explain that she sometimes does religious art and blah, blah, blah. Once she got to a stopping point, I quickly excused myself and got out of there. It left a bad taste in my mouth. I had been thinking about answering another call at that gallery but now I am leaning towards not.
I know what the artist ego is like. I am one. I believe in myself and my work but I don't want to come across as an arrogant a-hole. I certainly don't want to be guilty of brushing another artist aside so I can toot my own horn. I am actually not very good at marketing myself. I really need to be better at it. But I think I can stop way short of acting like this person. You have my permission to talk to me if I act like that.
And besides, I really didn't think much of her work. Is that bad to say?
Hee hee.
Posted by What Would Jesus Glue? at 4:32 PM No comments:

Very few people (at least by my observation) take the time to have conversations anymore. We live in a small talk world; a chit-chatty, shallow pool of meaningless jabber. I hate small talk. I am terrible at it and I refuse to engage in it. In meeting new people, I'll shake a hand and offer a fair, "How do you do?" but beyond that, I usually just clam up. Part of that is because, like I said before, I am not good at the small talk. The other reason is I am a pretty shy guy. I tip the scales pretty heavily on the side of extrovert. So, in new situations with new people I am hardly the life of the party. In fact, I usually come across as aloof, distant and seemingly above everyone else. This is hardly the case. I am, in truth, scared to death, unsure of myself and ready to retreat swiftly back into the comfort of my hidey hole. I have tried to overcome this in the past but I've never truly conquered it. It usually takes a long time for me to feel safe enough with someone to begin being myself in their presence. (which is difficult because I don't really know who I am anymore) Some people barrel thru my walls and plant a flag stating, "I'm here whether you like it or not!" Others tip-toe around the edges looking for a crack. I can't really say what the best approach is. I only have one suggestion.
Skip the small talk.
Yep. If you really want me to step out of my shell and interact you must put aside the chit-chat and engage me in conversation. Real talk. Swim beyond the shallows and go deep. I'm game. Really. Oh, and another thing you can do is not take yourself (or me) too seriously. I love to kid around and have fun. I find that most people I've met in recent years don't know how to have fun. Frankly I don't know how they survive life. I used to be known as a very funny person but my jokes and sarcasm fall on mostly deaf and humorless ears these days. I suppose that's why my art is so full of humor. It's the only way I have to get it out.
I wish these thoughts were more organized but, alas, this is what you get. I swore to myself that I would blog more. That requires a freedom to write without organizing and editing. So, that's what I'm doing.
Posted by What Would Jesus Glue? at 10:47 AM No comments: 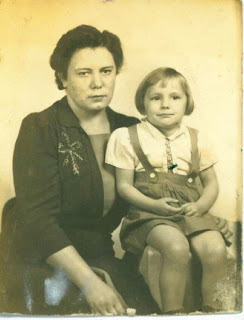 I was talking to my mom a little bit ago and she reminded me that 32 years ago today we buried my Nana. (The picture is of Nana and my mom) Naturally this got me thinking about my Nana and what a wonderful person she was. She was the greatest grandmother anyone could ever want to have. I have no doubt that I am an artist today because of her influence. She was pretty creative herself. She used sit in her chair and do Tri-Chem (tracing patterns with colored paint in tubes) on pillowcases and other stuff. She made Christmas wreaths out of the plastic rings that hold beer cans together. (My Papa drank a lot of beer so these were plentiful) And she always had stuff around for me to be creative with. Sketch pads, pens, pencils, blocks, army men, toy dinosaurs, etc.
She also nurtured my creativity in other ways. She let me watch monster movies on TV. Every day during the week they had The Big Show at 3pm on one of the local stations and every once in a while they would show old monster movies. I loved 'em! She also let me watch all the crazy comedy shows I liked like Gilligan's Island, The Lucy Show, The Beverly Hillbillies, etc. Her biggest sacrifice was to take me to movies to see stuff I know she had no interest in at all. She once took me to see Battle for the Planet of the Apes because she knew I wanted to see it. That's an awesome Nana!
She did tons of other stuff, too. Way too much to mention here. I just wanted to say that Nana's on my mind today. She was the best.
Posted by What Would Jesus Glue? at 4:10 PM No comments:

Since last night was Greenwood's Artwalk I figure this is as good a time as any to do an art update. Here goes.

- Shows continue to line up. I am booked pretty much thru July. I am also working on some images for some mail art projects.

- Last night, I talked to my new friend Matt Harrison about his documentary Citizen Heroes: The Rise of the Rain City Superhero Movement. Matt and his crew showed up at Tasty for the March superhero-themed show to film Phoenix Jones. I was wearing my Super Jesus costume so they ended up filming me in front of the stained glass window on the Lutheran church across the street. Matt showed me some of the footage last night and said he was very pleased with how it came out. He said he's pretty certain I'll make it in the film. How cool would that be? Whether I make it in or not, I'm still looking forward to seeing the film when it's finished.

- Speaking of Super Jesus, I'm probably going to wear the costume again for a possible opening in May. It will be a Jesus-centric show featuring my Christ collages. More details to come.

- My work is going to be included in a book that will be published in 2012. It's called Modern Vintage Illustration. That's really all I know at this point. I'm also trying to nail down a photo shoot of our studio for a future book about artists and their studios and I've sent images and info to an artist friend for a magazine article he's working on. More great publicity when all these things hit the streets.

Not much else to tell. My art making has slowed a bit of late but it's been more about shifting gears than not having time. I feel like my art might want to move in a different direction but I'm still feeling that situation out. Also in the works is a future revamp of the studio to make more space. Sarah and I are also going to revamp the apartment a bit w/ some new furniture. All of this will probably happen around the same time. So, as you can see, things are still busy and happening. Sales aren't what I'd like them to be but that's the nature of the business and the economy. More later as there's more to share.
Posted by What Would Jesus Glue? at 3:42 PM No comments:

I just spent a few minutes backtracking on my blog, reading what I was up to in April in past years. Very interesting to go back and see where you were at that point in life. Unfortunately my blogging has fallen off in the past year or so. I really should get back to it for the sheer "journal" or "diary" aspect of it. I stay so busy with art and such that I don't ever think about writing anymore. I'll endeavor to write more in the future especially recording important events because I know I'll really enjoy looking back on them in the future.
Posted by What Would Jesus Glue? at 3:15 PM No comments: