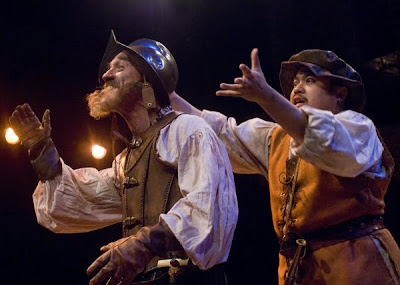 We found out tonight (via Jeff Berryman who just happens to be Quixote in the picture) that Sarah has been nominated for a Gregory Award in the category of Outstanding Costume Design. The Gregory Awards are Seattle's theatre awards...like the Tony's I suppose. (I don't know...I'm a visual art person) Anywho, so Jeff tells us and we're a bit perplexed as to why Sarah wasn't notified. When we got home she checked and the email had been sent to her spam folder at work.
So, that's very cool. She's excited and so am I. It's about time her outstanding work here in Seattle gets some notice. I may be just a bit biased but I also know how good she is at her job. And...it's not the first (or last) time she's been nominated for an award. In grad school she was nominated for a Barrymore which is Philly's theatre award. She was the only one nominated in the category that had not designed for Broadway. (she was still in grad school!)
Very proud husband here. Guess I'll have to buy a ticket so I can go to the awards ceremony with her. (no "plus one?") Cliche as it might sound, it IS an honor to be nominated.
Way to go, baby!
Posted by What Would Jesus Glue? at 11:12 PM