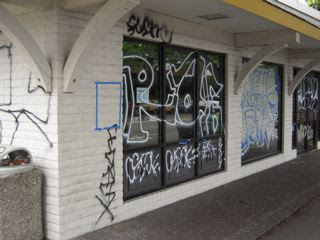 Graffiti has become a big problem in Seattle of late. And it's not the good kind of graffiti. Don't know the difference between good and bad? Well, it's all a matter of personal opinion anyway but some graffiti artists are superb artists and their graffiti is beautiful stuff to behold. Unfortunately Seattle doesn't seem to have any Michelangelo's of street art. All the good stuff is hanging in the urban galleries around town. No, the taggers that are bombing our streets are basically less talented than a kindergartener with color blindness. It's total vandalism no question. Our neighborhood especially (Greenwood) has been getting nuked of late. The McDonald's that shut down recently (Yay!) is now covered with tags (Boo!). I just read an article about Seattle Sound Transit putting one of their new trains on display and it got bombed. (they didn't include a pic in the article) The funny thing is that someone called them before that and said you shouldn't put that out there, it's gonna get bombed. They blew off the warning, said they had 24 hour security and guess what? They got bombed! SIGH! The only thing worse than crappy taggers is cocky transit people.
What is Seattle gonna do about it all? I have no clue. Maybe if they had some artists paint some planned murals or even planned graffiti on some popular tag spots it might curb some of the bombing. Taggers usually respect public art and leave it alone.
Here's an article from the Seattle PI about the situation.
Posted by What Would Jesus Glue? at 6:30 PM

It seems like most governmental agencies are arrogant when given advice.
Did they seriously think that the local security company (which probably has on staff mainly 75 year-old Barney Fife's) were going to be able to beat off the scourge of taggers?