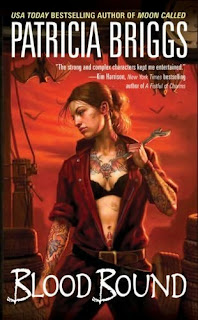 Blood Bound by Patricia Briggs
Mechanic Mercy Thompson has friends in low places-and in dark ones. And now she owes one of them a favor. Since she can shapeshift at will, she agrees to act as some extra muscle when her vampire friend Stefan goes to deliver a message to another of his kind.
But this new vampire is hardly ordinary-and neither is the demon inside of him.
I've been a bit short on things to read lately so I picked up this second in a series just to have something. I liked the first book but had decided to give the whole urban fantasy genre a rest because I was burned out on it. After a while, they all start to read the same. That said, I enjoyed this book for what it was. I don't think the story was all that strong and it was tough to get into. The climax was good though. I'm not ready to move to book 3 just yet but I'll keep it in mind during a slack reading time.
I'd like to talk about the cover for a second. Who is the target audience for this book? For the most part, these books are read primarily by women. So, why is there a tattooed pin-up girl on the cover? I'm a guy and it doesn't appeal to me at all. It makes it look like some paranormal romance novel...which it isn't. This series isn't the only one with odd covers. Most of the genre has begun to use these dark, pseudo Harlequin covers. Weird. I just don't get it.
Batman: The Man Who Laughs by Ed Brubaker and Doug Mahnke
I grabbed this at the library because I like Joker stories and I like Mahnke's art. This ended up being just another rehash of the Joker's origin story and not a particularly good one. Mahnke's art is great though. I didn't bother to read the back-up story involving Batman and Golden Age Green Lantern. It looked dull.
Posted by What Would Jesus Glue? at 10:16 AM