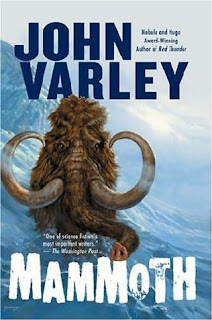 Mammoth by John Varley
In a barren province of Canada, a mammoth hunter has made the discovery of a lifetime: an intact frozen wooly mammoth. But what he finds during the painstaking process of excavating the huge creature boggles the mind. Huddled next to the mammoth is the mummified body of a Stone Age man around 12,000 years old. And he is wearing a wristwatch.
In my opinion, the story never took off. It just sort of laid there and didn't reach the potential it could and should have. I was drawn to it for it's mix of time travel and prehistoric creatures in our time themes. I like those types of stories. This one, however, failed to deliver. It was just an okay read.

John Byrne's Compleat Next Men Volumes 1 & 2
I haven't read this since my own copies were ruined in the Apartment Fire of '99. I really enjoyed diving into the Next Men's world again. It's a similar story to X-Men involving mutated humans living among us. I don't think I had ever read the ending though. I didn't care for it. I think there was supposed to be more to the story but Byrne abandoned the project. Too bad. For my money, Byrne is the best artist working in comics today and he's not a bad writer either. It sucks that these volumes aren't in color like my lost TPBs but it's from the library so pickers can't be choosers.
Posted by What Would Jesus Glue? at 2:27 PM