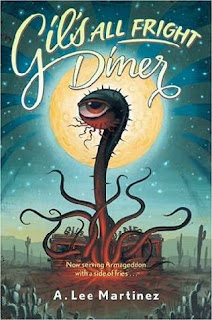 Gil's All Fright Diner by A. Lee Martinez
Welcome to Gil’s All Night Diner, where zombie attacks are a regular occurrence and you never know what might be lurking in the freezer. . . .Duke and Earl are just passing through Rockwood county in their pick-up truck when they stop at the diner for a quick bite to eat. They aren’t planning to stick around--until Loretta, the eatery’s owner, offers them one hundred dollars to take care of her zombie problem. Given that Duke is a werewolf and Earl’s a vampire, this looks right up their alley.But the shambling dead are just the tip of a particularly spiky iceberg. Seems someone’s out to drive Loretta from the diner, and more than willing to raise a little hell on earth if that’s what it takes. Before Duke and Earl get to the bottom of the diner’s troubles, they’ll run into such otherworldly complications as undead cattle, an amorous ghost, a jailbait sorceress, and the terrifying occult power of pig Latin.And maybe--just maybe--the End of the World, too. Gory, sexy, and flat-out hilarious, Gil’s All Fright Diner will tickle your funny bone--before ripping it out of its socket!
This is a re-read for me. I've liked just about every book by Martinez that I've read so I thought I'd go back and retry the first one. It's still pretty good although the ending is kinda cliche and lame. I got bored with it toward the end. Still, a pretty funny twist on the urban fantasy genre.

The Wizard of Oz by L. Frank Baum
After seeing Wicked the other night, I was without something to read so my wife pulled out her childhood copy of Wizard for me to try. Since I've never read any of these books, my curiosity was high. It's not exactly like the MGM movie but I can see why they embellished. It moves along at a pretty fair clip. They travel, a problem arises, they solve it and move on. Pretty basic but interesting to read in context with everything that Oz has become to us in the here and now.
Posted by What Would Jesus Glue? at 7:54 PM