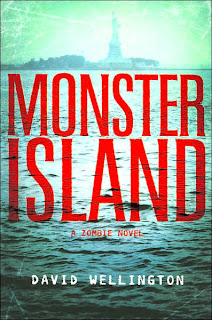 Monster Island by David Wellington
It's one month after a global disaster. The most "developed" nations of the world have fallen to the shambling zombie masses. Only a few pockets of humanity survive — in places rife with high-powered weaponry, such as Somalia. In New York City, the dead walk the streets, driven by an insatiable hunger for all things living. One amongst them is different; though he shares their appetites he has retained his human intelligence. Alone among the mindless zombies, Gary Fleck is an eyewitness to the end of the world — and perhaps the evil genius behind it all. From the other side of the planet, a small but heavily-armed group of schoolgirls-turned-soldiers has come in search of desperately needed medicine. Dekalb, a former United Nations weapons inspector, leads them as their local guide. Ayaan, a crack shot at the age of sixteen, will stop at nothing to complete her mission. They think they are prepared for anything. On Monster Island they will find that there is something worse even than being undead, as Gary learns the true price of survival.

I'm not usually one to read a zombie novel but I decided to give this one a try. I almost put it down a couple of times within the first couple chapters but after that it got better. The character of Gary is quite interesting - a zombie with intellect. It was just different enough to grab my attention. Beyond that, I'm not sure if I liked it well enough to continue with the series. We'll see how desperate my reading situation gets over the next few months.
Posted by What Would Jesus Glue? at 3:42 PM