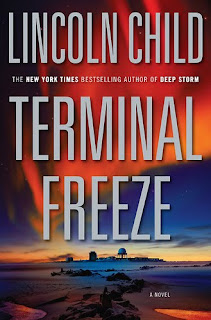 Terminal Freeze by Lincoln Child
Alaska's Federal Wilderness Zone.two hundred miles north of the Arctic Circle.one of the most remote places on Earth. But for a group of scientists sponsored by a major media conglomerate, an expedition to the Zone represents the opportunity of a lifetime to study the effects of global warming. The expedition changes suddenly on a routine foray into a glacial ice cave, where the group makes an astonishing find: an ancient animal encased in solid ice. It appears to be some kind of giant cat, possibly a saber-toothed tiger. When their discovery is reported back, their parent company quickly plans the ultimate spectacle - the animal will be cut from the ice, thawed, and revealed on live television. Ignoring the dire warnings of a local Eskimo group (and a native legend forecasting doom for anyone who disturbs this mythic creature), the scientists make one more horrifying discovery: the beast is no cat.it's an ancient killing machine. And it may not be dead.
I used to enjoy Lincoln Child's books. I also used to enjoy the ones he co-wrote with Douglas Preston. Somewhere along the way I stopped enjoying them. Did they change? Did I? All I know is this book was boring and predictable from page 1. The only reason I finished it was because it was a swift read. I gave up on Preston/Child a few years ago. I think I'm officially done with Child now.

The Great Divorce by C. S. Lewis
C.S. Lewis takes us on a profound journey through both heaven and hell in this engaging allegorical tale. Using his extraordinary descriptive powers, Lewis introduces us to supernatural beings who will change the way we think about good and evil.
I decided to re-read this because Taproot is doing the play based on the book starting in January. Since I had read the book before, I knew doing a stage production based on it would be difficult. I remain skeptical. I'm sure they will pull it off nicely. They always do. I wanted to be a bit more familiar with the story for viewing the play.
I didn't enjoy reading the book as much this time. I think it's because my belief system is different this time around. My faith is in flux so I don't have a solid foundation to rest upon like I did the first time around. Things in the book didn't resonate with me like they did that first time.
Posted by What Would Jesus Glue? at 8:34 PM