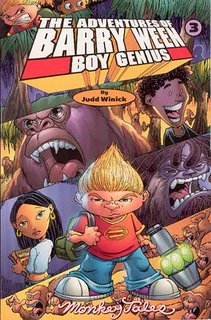 Barry Ween: Boy Genius Volumes 1-4 by Judd Winick - Call it the middle-schooler in me. These rude, crude tales of the smartest kid in the world crack me up. Barry is foul-mouthed, bad-tempered and pretty much saves the world about once a day. Lotsa fun but, like I said, pretty vulgar so if that sort of thing bothers you, stay away!
Dark Days and 30 Days of Night: Return to Barrow by Steve Niles and Ben Templesmith - A continuation of the story begun in 30 Days of Night in which Stella Olemaun continues her fight against the vampires. These books won't win any prizes for writing but as vampire/horror comics go, they're not bad. The art is different stylistically than anything I've ever cared for before but it's starting to grow on me. I like that it is a painterly style rather than your regular black and white inked comics style. It's dark but interesting. I still sense that there are photos under the surface of some of the panels but I'm not sure. Let's face it, if I hadn't checked these out of the library, I probably would never have known about them but they are interesting and I do like a good vampire story every once in a while. Once again, I must warn that these comics are very graphic and violent. Lots of blood and guts. If you don't like that sort of thing, go for the Archie comics. That Jughead. He'll eat anything.
Posted by What Would Jesus Glue? at 3:56 PM