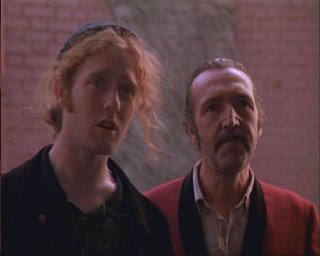 Last night, Sarah and I went to see Waiting for Godot at the Moore Theater. It was performed by the Gate Theatre from Dublin, Ireland. Neither one of us had ever seen it and we were curious. We knew it was a weird play but we went anyway. We left at intermission.
The night wasn't a total loss for me though because playing one of the characters was Johnny Murphy (the fellow with the mustache) who played Joey "The Lips" Fagan in one of my favorite movies, The Commitments. I love his character in the movie. Although a bit strange and not entirely truthful, Joey's character is the heart and soul of the band. Nice to see that ol' Johnny's still working.
Posted by What Would Jesus Glue? at 3:19 PM