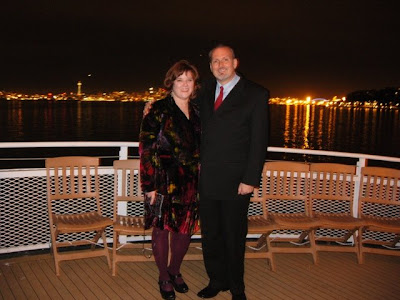 Last Thursday was our 3rd Wedding Anniversary. We celebrated on Saturday night with an Argosy dinner cruise. You have a nice dinner while the boat cruises around the Seattle waterfront. We did it for our 1st and decided to do it again.
I wish it had been a bit less eventful. When we arrived, we turned our jeep over to the valet but as we were going inside to get our boarding passes we heard a horrible screeching sound. We turned and watched our jeep barely miss a 120K Mercedes. I went over to see what was up. The valet said the jeep just gunned itself and he was stomping the brake as hard as he could to stop it. You could smell the burnt rubber. Now, I'm not saying I don't believe him but the jeep's never done that before and hasn't done it since. He was so shaken he asked if I would park it so I did.
We finally boarded the boat and we were both so addled we decided to get a drink. We finally calmed down but I only drank about half mine because I was starting to get sleepy. I'm pretty wimpy when it come to drinks.
We had a nice dinner. This time we were on the floor with the band which was fun. There was a group of rowdy black ladies near us and they were having a good time. When the band finally started playing some dance songs they filled the dance floor and livened up the joint. A couple behind us got engaged on the cruise so they made a big deal about that.
We got back to the dock, got our jeep and headed home. On the way, an ambulance blasted out of a side street and scared us to death. It was just a little too much excitement. All in all, it was a fun night but the whole valet/jeep thing was so weird.
Posted by What Would Jesus Glue? at 12:38 PM