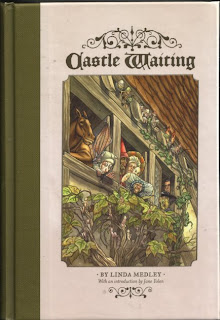 Castle Waiting by Linda Medley
This award-winning graphic novel tells the story of an isolated, abandoned castle and the eccentric inhabitants who bring it back to life. A fable for modern times, "Castle Waiting" is a fairy tale that's not about rescuing the princess, saving the kingdom, or fighting the ultimate war between Good and Evil, but about being a hero in one's own home.
I picked this up on a whim at the library and I'm glad I did. I enjoyed it. The art is very good and the story is fun. Granted, I enjoyed the story more towards the end of the book but, all in all, it was a fun, fairy tale read.

To Your Scattered Bodies Go: Riverworld Book 1 by Philip Jose Farmer
All those who ever lived on Earth have found themselves resurrected--healthy, young, and naked as newborns--on the grassy banks of a mighty river, in a world unknown. Miraculously provided with food, but with no clues to the meaning of their strange new afterlife, billions of people from every period of Earth's history--and prehistory--must start again. Sir Francis Bacon would be the first to glimpse the incredible way-station, a link between worlds. This forbidden sight would spur the renowned 19th-century explorer to uncover the truth. Along with a remarkable group of compatriots, including Alice Liddell Hargreaves (the Victorian girl who was the inspiration for Alice in Wonderland), an English-speaking Neanderthal, a WWII Holocaust survivor, and a wise extraterrestrial, Burton sets sail on the magnificent river. His mission: to confront humankind's mysterious benefactors, and learn the true purpose--innocent or evil--of the Riverworld.
If you are like me, this description is intriguing. It sucked me in and made me want to read the book. That and I heard that they are making this into a tv series. I decided I would try it. It started great but by the end I was confused and disinterested. Many interesting characters disappeared and the lead character died and came back so many times I couldn't keep up. I felt like this would be a fun series to get into but that just wasn't the case.

Serenity: Those Left Behind & Serenity: Better Days
These graphic novels continue the stories started on the tv series Firefly and the movie Serenity. I thought it might be a good way to get a fix of more Firefly but I didn't enjoy these all that much. Those Left Behind is the better of the two since it bridges the series and the movie but I had hoped for more answers to the question of what happened to River when she was being experimented on. No more answers to be found here. SIGH.
Posted by What Would Jesus Glue? at 7:21 AM

Sci-Fi did a movie based on Riverworld.
I found it to be poorly done in my opinion and wouldn't waste my time watching it again.
The Sci Fi treatment didn't make me want to rush out and buy the book(s).
It's too bad that Sci Fi has a better record of creating crap than of quality.

The title of that book has stuck with me since high school. (to your scattered bodies go) I tried reading the book and only got about halfway in. Blech.
Then, I wrote a short story based on the title alone. tee-hee. Mine was pretty bad- Oh, well, I was fifteen or sixteen and definitely not a brilliant protege.
Thanks for letting me know about the Serenity graphic novels. Even if they're lousy I want to read them! We just rewatched the series again. So few! Everyone in my house, including me, was sad when we finished them off so quickly. I want more Firefly...