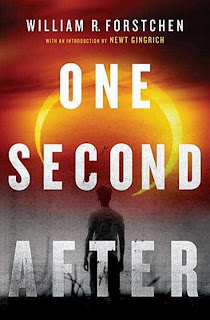 One Second After by William Forstchen
In a small North Carolina town, one man struggles to save his family after America loses a war that will send it back to the Dark Ages. Already cited on the floor of Congress and discussed in the corridors of the Pentagon as a book all Americans should read, One Second After is the story of a war scenario that could become all too terrifyingly real. Based upon a real weapon—the Electro Magnetic Pulse (EMP)—which may already be in the hands of our enemies, it is a truly realistic look at the awesome power of a weapon that can destroy the entire United States, literally within one second.In the tradition of On the Beach, Fail Safe, and Testament, this book, set in a typical American town, is a dire warning of what might be our future and our end.
This is the scariest, most depressing, hopeless book I've ever read in my entire life. I know the author is trying to convey the realities of the possibility of an EMP but this book was tough. The major problem I had with it is it offers no hope. Basically it says if this scenario happens, we're all screwed. There doesn't seem to be much anyone can do about it. The community in the book (Black Mountain, NC...one of my favorite places in the world) is small and you think, "Hey, they can band together and survive," but Forstchen paints a bleak picture. I can honestly say I wish I had never read this book. The best I can do is try to forget about it and just live day to day. Worrying about this kind of stuff might kill me before an actual event like it would.
Posted by What Would Jesus Glue? at 4:33 PM

I was going to try and get this to read, but maybe not.
Reality is depressing enough when you look at the end sum of the possibilities.
Alas, Babylon had it's depressing moments, but at least there was a somewhat 'happy' ending.

Yikes. I'll definitely pass on this one! Thanks for the review.