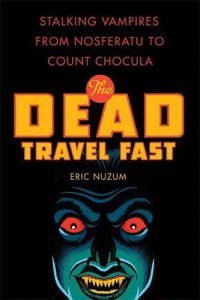 The Dead Travel Fast: Stalking Vampires from Nosferatu to Count Chocula by Eric Nuzum
The Dead Travel Fast is about vampires, death, chickens, fear, things that smell bad, the love of a good woman, and germs... but mostly it's about vampires.The undead are everywhere. They're not just in movies and books, but in commercials, fetish clubs, and even in your breakfast cereal. If you look, you'll discover that bloodsuckers have gone from guest spots in rural folk tales to becoming some of the most recognizable bad guys in the modern world. Eric Nuzum wanted to find out why and how this happened. And he found the answer in Goth clubs, darkened parks, haunted houses, and... chain restaurants.Nuzum was willing to do whatever it took to better understand the vampire phenomenon. He traveled across Transylvania on a tour hosted by Butch Patrick (a.k.a. Eddie Munster), sat through Las Vegas' only topless vampire revue, hung out with assorted shady characters, and spent hours in a coffin. He even drank his own blood --just one more step in his quest to understand the weird, offbeat world of vampires and the people who love them. The Dead Travel Fast is the hilarious result of this bloody, gory, and often foolhardy journey. With his unmatched firsthand experience, Eric Nuzum delivers a far-reaching look at vampires in pop culture, from Bram to Bela to Buffy, and at what vampires and vampirism have come to mean to us today.And the blood? Let's just say it doesn't go with eggs.

I heard about this book on NPR. Everyone who knows me well knows that I have always had a thing for monsters. From an early age I was begging my parents to let me stay up late to watch horror movies and voraciously reading Famous Monsters of Filmland magazine. No big surprise that I would want to read this book.
That being said, I enjoyed the read. Nuzum has a "smart-ass" approach to the subject that I appreciate. He didn't take the subject matter too seriously which is a good thing. He did, however, showcase some quite humorless devotees to vampires that were at times funny but, more often than not, pretty scary. All in all, a pretty good overview of the history of vampires and why we are so hung up on them.
Posted by What Would Jesus Glue? at 11:17 AM