Seattle Comicon: The Beat Goes On 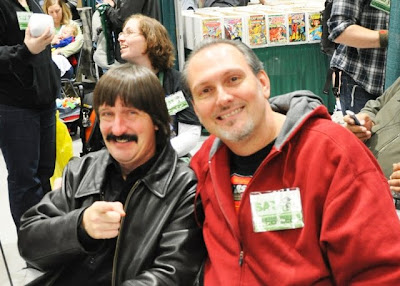 Today I went to the Emerald City Comicon for the first time. I've been invited by friends for the past couple years but couldn't go due to work. This year, the Con was earlier so it worked out for me to go. I'm glad I did. It was a blast.
I may write more later but I wanted to tell this story before I forget details. Clark and I had walked around a bit and decided it was time to sit and have a bite to eat. We grabbed our food and tried to find a seat. Finally two spots opened up and we squeezed in. As I was getting settled at the table I noticed the gentleman sitting on my right bore more than a striking resemblance to Sonny Bono. I was afraid to ask him if this was purposeful but I heard him talking about Bono so I figured, "What the heck? You only live once and you don't usually end up next to Sonny Bono at Comicon...so ask already." So I did.
Turns out he was a very nice Bono impersonator named Gary. We chatted for a while about his act and other things. I gave him my card and he inquired about possible religious affiliations. (my card has What Would Jesus Glue on it) I told him that I had been a minister but not anymore. He told me that he had spent 20 years as a minister in the Assemblies of God church but he was no longer a minister either. I asked if he looked like Sonny at that time but he said no. I just thought it would be great to have a pastor that looked like Sonny Bono. Maybe a song director that looked like Cher?
So anyway, we finished our lunch, Clark snapped a quick picture (I'm not eating next to Sonny Bono and not having proof) and bid our farewells. He shook my hand and said, "Remember, the beat goes on." I think I said, "It certainly does."
And that was just lunch.
Posted by What Would Jesus Glue? at 9:40 PM