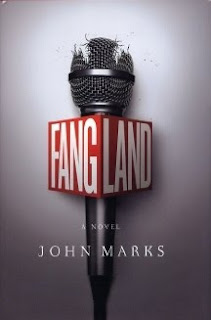 Fangland by John Marks
Evangeline Harker is a producer for a television news show who takes an assignment to go into Romania and investigate a criminal legend, Ion Torgu, to get him on camera. Soon, Torgu accosts her, impersonating Dracula. Like Stoker's tale, Harker finds herself held for months, before she pops up in a Transylvanian monastery as this Torgu Dracula gets introduced to New York City.
A contemporary re-imagining of Stoker's Dracula? Sign me up. Unfortunately, this book was all over the place. If it could have stayed with Evangeline, I think I would have enjoyed it but it jumped around from her point of view to emails from other characters and I just got lost and bored. I hear they are making a movie of this starring Hillary Swank. Perhaps the basics of the story can shine thru and make a decent movie.
Posted by What Would Jesus Glue? at 9:22 PM