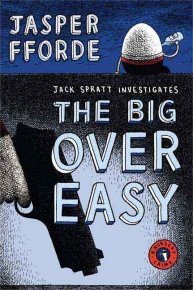 The Big Over Easy by Jasper Fforde - Humpty Dumpty has been murdered and Jack Spratt and Mary Mary of the Nursery Crime Division must try to solve the crime.
It took some time for me to get into this one. I immediately recognized that it's a parody of British mysteries like Inspector Morse and the like. (my wife is addicted...I don't care for them too much) Since I'm not a big fan of the genre, I didn't immediately like the book but the story and it's silly intricacies grew on me after a while. I may actually read some more of Fforde's stuff. Sarah says I may enjoy his other series better. So, if you're in the mood for a silly mystery that plays havoc with fairy tales, Mother Goose, and mythology, this just might be the book for you.
Posted by What Would Jesus Glue? at 5:22 PM