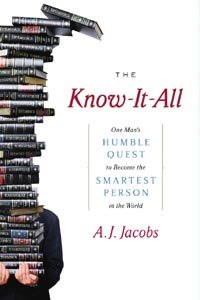 The Know-It-All: One Man's Humble Quest to Become the Smartest Person in the World by A. J. Jacobs - Jacobs, an editor for Esquire magazine, spends a year reading the entire Encyclopaedia Britannica from A to Z. This book documents his read while life continues on around him.
I found this book very enjoyable. I decided to read only a few pages at a time over breakfast so it took me a while to finish it. The book is written in blog-like chunks so it's easy to digest in little bites. Jacobs self-deprecating humor and his documentation of his constant attempts to prove he's smarter (meetings with Mensa, an interview with Alex Trebek, contestant on "Who Wants to be a Millionaire," etc.) only serve to prove he's a bit of a doofus (aren't we all?) but it's all in good fun. By the end of the book, he settles into telling of some nice life-lessons he has learned through the process. A nice read and perhaps a challenge for us all to better ourselves in some way, day by day.
I just read on his website that he is releasing a new book this year called "The Year of Living Biblically." Here's the synopsis:

"This new book will be a diary of my life as I try to obey the Bible as literally as possible. Not just the famous prescriptions, such as the Ten Commandments, turn the other cheek, and the Golden Rule. But the less publicized rules as well: not trimming my beard, stoning adulterers, and bathing after sex, to name a few. The book will be an exploration of what is good about the Bible and what is of debatable relevance to modern times."

I'll be sure to try and read that one as well.
Posted by What Would Jesus Glue? at 1:51 PM