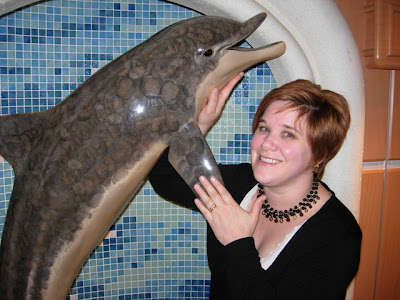 Since internet access aboard ship cost a pretty penny I went back to the old fashioned, hand-written journaling of old. I will share my thoughts from my vacation over the next few days. Stay tuned.

Sunday, May 20th 2007
With nothing but ocean on all 4 sides of the Golden Princess, I am sitting in the conservatory reflecting on what has happened thus far.
We arrived at Terminal 30 on May 19th and checked in with a moderate wait. The weather was stunningly beautiful if not a little chilly on the waterfront. We finally board the gigantic ship and find our way to our room. Well, not so much a room as a crackerbox. Needless to say we won't spend much time there. The shower is reminiscent of something you might find at a Nazi Death Camp but it gets you clean if you move around enough. It turns out that moving around isn't a problem as long as you don't mind stumbling around like a drunk. So far Sarah and I haven't found the rocking of the ship very soothing. We're both a little green around the gills and neither of us slept very well last night. But...back to yesterday.
After getting settled in our room and grabbing a snack, we explored the ship a bit to get the lay of the land. (ha) We figured out the drink price money-making scheme immediately and opted to drink water. After a little more wandering we went back to the room to read up on the activities possibilities and get dressed for dinner.
At dinner we sat with a newly married couple in their 20's named Steve and Justine. They are very nice and very funny. They are from Chicago but Justine wants to move to Seattle. We told them how expensive it is but that we love it anyway.
After dinner we wandered a bit more and decided to take a dip in the jacuzzi. It was wonderful! After about 15 minutes I got in the pool to cool off. It was at this time that the boat started rocking big time. The pool turned into a surf contest at Waikiki as I got washed from one end to the other. Sarah was worried but I had fun. It was no worse than the Gulf back home. We hit the jacuzzi one last time and prepared to go to the room. As we were leaving a ship employee showed up to secure the pool and loose items on deck. Today, none of the pools are being used and come are fully drained. I guess it's pretty rough. What am I saying? It's rough. Last night we rolled around in bed (not in the good way) and slept little.
This morning we got up around 8am still a little green but also feeling a bit hungry. We hit the breakfast buffet but neither of us ate a ton. After that we attended the morning trivia. If the point of the activity was to make you feel stupid then mission accomplished. The questions were pretty hard and we didn't do too well. Sarah gave up on the idea of Bingo after finding out that it cost $. There are lots of hidden costs here...why am I surprised?
So, here we sit in the conservatory. Sarah is napping in a chaise and I am contemplating a trip to the arcade. Today we are at sea all day. I think this day is meant for relaxation but so far I'm a bit bored. I guess I'm not very good at relaxing.
Afterthoughts: The rough weather was caused by our passing Vancouver Island and a cold front hitting all at the same time. We later found out that tons of folks got sick and the Medical Office got flooded with folks. They ran out of Dramamine. One lady we met had to get a shot. She said she was worshipping the porcelain god for 6 hours.
The room was small but we were taken care of by our steward named Aldo. He cleaned every chance he got and turned down our bed every night. We miss Aldo.
Princess Cruises are nice but they do nickel and dime you to death. They charge not only for alcoholic drinks (which is fine) but for soft drinks and coffee. A can of soft drink cost around $2.50 including gratuity. We brought a case of water on board but not drinks. The told me on the phone that Caffeine-Free Diet Coke was served on board. They lied. We finally found drinks in Skagway.
It turns out that the pools were empty the next day because the water splashed out of them during the night. What was funny was that they had a TV channel dedicated to ship info like position and temperature and whatnot and they also reported the pool temperatures. They kept on reporting that even though the pools were emply. I found it funny.
At some point on Sunday or Monday we played Putt Putt. You haven't played Putt Putt unless you've played on a moving boat. I think each hole had an average of 20 hits to finally sink the putt.
Posted by What Would Jesus Glue? at 10:10 AM

I've got local friends who took a day cruise out of Anchorage last Thursday, (I think it was the 24th). They'd both always wanted to do it and finally had enough money... The ocean was horribly rough and they spent the whole time hanging over the side of the boat. In fact, the ship ran out of sick bags... They were all miserable (they've got two young kids-7 & 5) and couldn't enjoy the scenery/glaciers very much, and they wish they hadn't done it. Sounds like your experience might have caught some of the same weather.