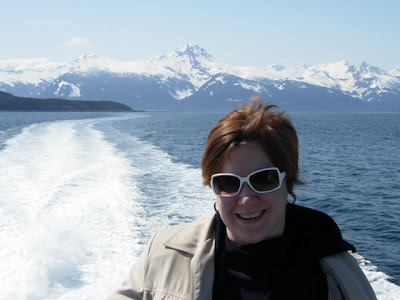 Monday, May 21st 11:10 pm
Long day. Fun day. Frustrating evening. Here are the highlights.
Grits for breakfast (yahoo) but they close the line right after we get our first helping.We watched the ship dock in Juneau.Around noon, we leave for our whale watching adventure. We saw between 7-9 whales with calves plus sea lions and eagles. One whale far away may have been an Orca?
After the whales we went to Mendenhall Glacier. Amazing! We didn't have enough time there. Just one hour. We hustled to the waterfall and back and then it was time to go.
Back to Juneau for a tram ride to the top of Mt. Roberts. Scattered throughout the mountain and on it's face are the remnants of the old gold mine. We saw Spirit the eagle who was shot through the beak. She can't be returned to the wild because she's blind in one eye. (Stupid people with guns) We played in the snow but couldn't go to the top due to avalanche warnings. I slid on my tookus in the snow. None of us were wearing the proper footwear so we slid all over the place.
Caffiene-Free Diet Coke search in Juneau yields no results. Alaska seems to love Pepsi. We do buy a six-pack of regular Diet Coke to take on the ship. One can springs a leak on the way up the gangway. While we are trying to clean it up an Asian steward pushing a woman in a wheelchair gets antsy with us and I bark. When we hit the room we had to clean out the bag because everything had DC on it. We finally got all cleaned up and headed to dinner w/ Steve and Justine.
Dinner is weird. The waiters won't let us touch anything because some people got sick. It's the same at the buffet later plus there was no good food at the buffet. It was all leftovers from dinner. The food on the ship isn't as good as I was expecting. We heard from Steve and Nita from Phoenix that Carnival and Royal Caribbean are better.
Watched and judged the first night of Princess Popstar, an American Idol-esque karaoke contest on the ship. I considered singing for a while but decided not to get involved. A couple of people were okay but most were pathetic...but pretty funny. I really liked the guy that sang AC/DC's You Shook Me All Night Long and rewrote the lyrics to dedicate to his ex-wife. It was a scream.
We watched the ship pull out of Juneau, grabbed a disapointing bite at the buffet and headed for bed. For some odd reason, the pics on our camera won't upload to the computer and the bedspread is missing. Frustration sets in. I really need to sleep tonight. I'm running on empty.
Afterthoughts: There were 2 buffet lines. Ours closed and the other stayed open. Bad timing on our part.
Mount Roberts tram was a great for the view but once up there we found out you could only walk about 50 yards due to dangerous snow conditions. Since the ride was $25 per it wasn't worth the money. A warning down below would have been nice.
The whole "no touchy" thing at dinner subsided after a couple of days but for those 2 days we were not allowed to serve ourselves at the buffet. Heck, we couldn't even touch the butter, salt or pepper. It was weird but I'm glad they were on top of the situation.
It was nice to talk to folks about other cruises. We felt like we learned alot. What we found was that every cruise line has it's positives and negatives. Princess is low on the list for good food, the entertainment is cheesy and they nickel and dime you to death. We heard about one cruise where they served 24 hour ice cream. Not so on Princess. You had to pay for it and it was only open about 7 hours. So, if you're going on a cruise, do some comparative shopping.
The bedspread incident...geez...after 3 calls and one wrong blanket delivered later we found that it was shoved up under the bed. I felt stupid.