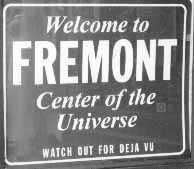 Had a great day on Sunday. We slept late (felt so good) then tried a new church called Quest. (No relation to A Tribe called Quest) It was an alright church. It was a status quo kind of service but people were friendly and the message was pretty good. The service was in their warehouse which is used most of the week for a coffeehouse. (In Seattle? What a radical concept) They seem to be plugged into the community dealing with helping people, social justice and the like. The church has a large asian population. It was nice to see diversity.
After church, we ate at Wendy's (our "we're broke but we still like it" place) and then we headed over to Fremont to check out the Sunday Market. Fremont is an artsy, funky little neigborhood full of restaurants, bookstores, galleries and antique shops. It's a fun place to hang out.
The Market turned out to be a great experience. We saw the guy who bought some of my postcards a few weeks back at his booth. He had some books I wanted but I had no money so I think he'll hold them for me. We then trekked on down the street and found another booth with lots of funky old postcards, stamps, printers letter blocks and typewriter keys. They say they'll either buy or trade for some of my old postcards. Looks like we'll be going back this Sunday.
After that, we headed over to meet Heather for an Argosy Lakes Cruise. It was a gorgeous day to be on the water. We spent the next 2 hours kicked back just taking in the scenery and talking up a storm.
When we got back to port, Heather took us to dinner in Fremont and then we all headed home. All in all, a nice, relaxing day. That's 2 lazy Sunday's in a row for us. I could get used to this.
Posted by What Would Jesus Glue? at 9:35 AM