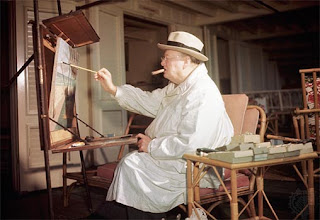 "...he (Churchill) recalled the first time he tried to paint a landscape out of doors. The great man of action felt paralyzed by indecision until a friend grabbed his brushes and started splashing and walloping paint 'on the absolutely cowering canvas. Anyone could see that it could not hit back. No evil fate avenged the jaunty violence. The canvas grinned in helplessness before me. The spell was broken. The sickly inhibitions rolled away. I seized the largest brush and fell upon my victim with Berserk fury. I have never felt any awe of a canvas since.' Churchill therefore found painting 'complete as a distraction. I know of nothing which, without exhausting the body, completely absorbs the mind. Whatever the worries of the hour or the threats of the future, once the picture has begun to flow along, there is no room for them in the mental screen. They pass out into shadow and darkness. All ones mental light, such as it is, becomes concentrated on the task. Time stands respectfully aside, and it is only after many hesitations that luncheon knocks gruffly at the door. When I have had to stand up on parade, or even, I regret to say, in church, for half and hour at a time, I have always felt that the erect position is not natural to man, has only been painfully aquired, and is only with fatigue and difficulty maintained. But no one who is fond of painting finds the slightest inconvenience, as long as the interest holds, in standing to paint for three or four hours at a stretch.'"

Source: The Accidental Masterpiece by Michael Kimmelman
Posted by What Would Jesus Glue? at 3:05 PM