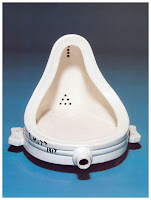 "I realized recently how frustrating it can be to fail to see what others find beautiful. If...you have ever walked into a museum or gallery or looked at a picture in a magazine...and wondered how anything so ugly and lacking in taste had come to be considered art, you might recall the moment in 1917 when Marcel Duchamp acquired a porcelain urinal from a plumbing equipment manufacturer...signed it "R. Mutt," and submitted the now infamous Fountain to the Society of Independent Artists exhibition...The society...found the urinal beyond the pale.
"You mean to say, if a man sent in horse manure glued to a canvas that would have to accept it?" asked the artist George Bellows.
"I'm afraid we would," replied Walter Arensberg, Duchamp's patron and champion, who had shopped with him for Fountain.
Arensberg...went on to defend the work aesthetically as a "lovely form," which was going too far even for Duchamp, who later said he was horrified that his readymades...had come to be admired for their beauty. "I thought to discourage aesthetics," he said. "I threw...the urinal in their faces as a challenge, and now they admire them for their aesthetic beauty."
"Immanuel Kant...saw engravings of tattooed native New Zealanders and announced that the tattoos did not enhance the beauty of the human figure. That was just one man's aesthetic opinion. It seems never to have occurred to him that the tattoos may not have had an aesthetic purpose but were the consequence of a ritual or religious passage: through the painful process of tattooing, the tattooed New Zealander achieved power. What was a question of beauty to one man was something entirely different to another."
So how to define the beautiful? The ancient Greeks...devised a mathematical scheme for the proportions of the human body that set an abstract ideal of physical beauty, which has little to do with real life. As Kenneth Clark wrote, "It is widely supposed that the naked human body is in itself an object upon which the eye dwells with pleasure and which we are glad to see depicted. But anyone who has frequented art schools and seen the shapeless, pitiful model that the students are industriously drawing will know this is an illusion."
"There is no excellent beauty that hath not some strangeness in its proportion." - Francis Bacon
Source: The Accidental Masterpiece by Michael Kimmelman
Posted by What Would Jesus Glue? at 4:29 PM