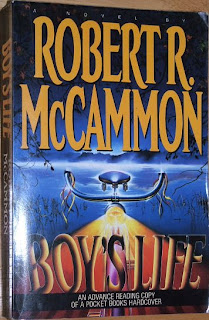 Boy's Life by Robert R. McCammon
The year is 1964. On a cold spring morning before the sun, Cory Mackenson is accompanying his father on his milk delivery route. Without warning a car appears in the road before them and plunges into a lake some say is bottomless. Cory's father makes a desperate attempt to save the driver, but instead comes face-to-face with a vision that will haunt and torment him: a dead man handcuffed to the steering wheel, naked and savagely beaten, a copper wire knotted around his neck. The lake's depths claim the car and the corpse, but the murderer's work is unfinished as, from that moment, both Cory and his father begin searching for the truth. The small town of Zephyr, Alabama, has been an idyllic home for Cory and his friends. But now, the murder of an unknown man who lies in the dark lake, his tortured soul crying out for justice, causes Cory's life to explode into a kaleidoscope of clues and deepening puzzles. His quest to understand the forces of good and evil at work in his hometown leads him through a maze of dangers and fascinations: the vicious Blaylock clan, who defend their nefarious backwoods trades with the barrels of their guns; a secret assembly of men united by racial hatred; a one-hundred-six-year-old black woman named the Lady who conjures snakes and hears voices of the dead; a reptilian thing that swims in the belly of a river; and a bicycle with a golden eye. As Cory searches for a killer, he learns more about the meaning of both life and death. A single green feather leads him deeper into the mystery, and soon he realizes not only his life, but the sanity of his father may hang in the balance.*

I have read this book many times. On my list of favorite books of all time, it is number 2 (after To Kill A Mockingbird). I have recommended it to many people and I have never had anyone tell me anything less than, "I loved it." It is a fantastic book written by an under-appreciated writer whose talent is equal to, if not rivals, that of Stephen King. (I got tired of King years ago) Unfortunately, McCammon isn't as prolific as King. Back in the early 90's, McCammon had some bad experiences with the publishing world and he dropped out. He has recently returned with a few books but I haven't read any of them yet. I don't think I need to read them to know that Boy's Life is his masterpiece. It's a magical book. Here's a sample.

"Men and women are still children deep in their hearts. They still would like to jump and play, but that heavy clay (of time) won't let them. They'd like to shake off every chain the world's put on them, take off their watches and neckties and Sunday shoes and return naked to the swimming hole, if just for one day. They'd like to feel free, and know that there's a momma and daddy at home who'll take care of things and love them no matter what. Even behind the face of the meanest man in the world is a scared little boy trying to wedge himself into a corner where he can't be hurt."

Do yourself a favor and read it. My lowest expectation is that you won't regret it. My highest is that the book will take it's place in your list of favorites, just like it has in mine.

* From the book jacket
Posted by What Would Jesus Glue? at 9:51 AM