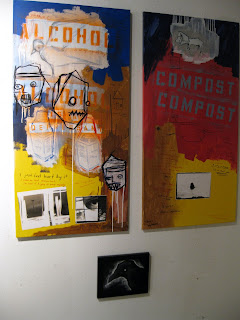 I spent the evening in Pioneer Square with Ernie and Marshall. We strolled, looking at art and people watching. It was fun. Here's a recap.
I hooked up with Ernie and we hit 619 Western, a building full of artists studios open for the art walk. We met Dave Bloomfield (starheadboy) whom I've admired for a while now. He was sharing a studio with Narboo, another artist I like alot. We looked at some other art and then left to hook up with Marshall. Ernie later remarked about the gallery where we saw all the "boob art." Funny.
We found Marshall, hit Occidental Park and a few galleries in the vicinity. I saw some t-shirts I like by Brendan Wenberg. I hope to hook up with him at the Fremont Market sometime to buy one. Ernie bought a woodblock print from a fellow in the park. After that we headed to the Toshiro-Kaplan building.
Wow. Right off the bat we saw some spectacular photos by Stephen Hillyard at Platform Gallery. Stunning stuff. Then we scooted next door to Garde-Rail and I was blown away by the paintings by Mr. Hooper. We entered the main building and stopped by Rock-Dement to see Stephen and Nichole. I love Stephen's new paintings. I also touched base with Nichole about the Corridor Gallery. She told me to duck in and talk to Lynn Shirmer so I did. She's great. It looks like I have a tentative show there for October. I always feel like a schmuck when I have to network. I feel all fake and schmoozy even though I know I'm probably not. It's just something that takes some effort. But Lynn had a great sense of humor (my favorite kind of people) so it was good. I didn't get to look at her work very closely (next time, I promise) but what I saw was amazing.
We were pretty much done after that so we grabbed a bite at The New Orleans Creole Restaurant. We had some pretty good gumbo/jambalaya and listened to very loud Dixieland provided by a live band. After dinner, we headed home.
I love art walks. I wish I could go to all of them. I always leave inspired.

Paintings in pic by Dave Bloomfield.
Posted by What Would Jesus Glue? at 10:09 PM