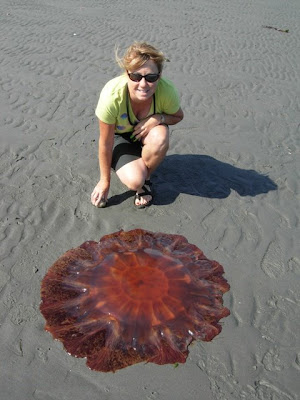 I went to low tide at Golden Gardens this morning. Our friend Heather, who has a degree in marine biology, met me out there. She's never been and I figured if you have a degree in marine biology you have to go at least once. I got there before her and wandered a bit. I found the lion mane jelly in the pic above before she got there. She finally arrived but it took some doing to meet up. First of all she ended up passing a woman singing opera and a very opinionated man who didn't like the opera. (Remember this guy. He appears later in our story) It seems she has a problem with what she called "the slime." That would be seaweed. She didn't want to walk thru it. I told her she had to man up and brave the slime so she could see the good stuff. She did great.
I took her back to the jellyfish and then we wandered taking in the splendor of sea stars, sun stars, sea cucumbers, anemones and the like. I picked up a sea star today because she told me it wouldn't hurt them. They never feel like you expect. They look all slimy but they are really hard. Not as fragile as I had thought. It was a gorgeous day to be on the beach. We picked up a few shells and headed back to the vehicles.
As we were shooting the breeze and about to part ways, the opinionated guy wanders up and strikes up a one-sided conversation. (all him) He regaled us with his adventures as a transcendental Buddhist, telling us about his walk of 10,000 miles, how his back used to hurt because he had a hole in his energy field, and how he remained healthy because he kept his body and his eyes in a juztapozition of fluidity. He was quite a character. He even cussed out some old people who passed by on bicycles just because they said, "Woo-hoo," to him. He finally winded down and left. There are lots of interesting folks around here who just need to talk a bit and then they wander off. That's Seattle.
I love the beaches here in the Pacific NW. I could spend hours exploring...and do when I can. I wonder if I should have been a marine biologist. If I had been, I definitely wouldn't be queasy about it.
Posted by What Would Jesus Glue? at 3:19 PM