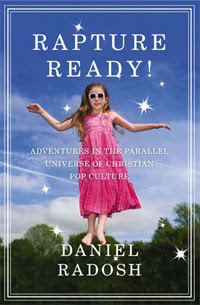 Rapture Ready: Adventures in the Parallel Universe of Christian Pop Culture by Daniel Radosh
What does it mean when a band is judged by how hard they pray rather than how hard they rock? Would Jesus buy “Jesus junk” or wear “witness wear”? What do Christian skate parks, raves, and romance novels say about evangelicalism — and America? Daniel Radosh went searching for the answers and reached some surprising conclusions. Written with the perfect blend of amusement and respect, Rapture Ready! is an insightful, entertaining, and deeply weird journey through the often hidden world of Christian pop culture. This vast and influential subculture — a $7 billion industry and growing — can no longer be ignored by anyone who wants to understand the social, spiritual and political aspirations of evangelical Christians. Through 18 cities and towns in 13 states — from the Bible Belt to the outskirts of Hollywood — Radosh encounters a fascinating cast of characters, including Bibleman, the Caped Christian; Rob Adonis, the founder and star of Ultimate Christian Wrestling; Ken Ham, the nation’s leading prophet of creationism; and Jay Bakker, the son of Jim and Tammy Faye and pastor of his own liberal, punk rock church. From Christian music festivals and theme parks to Passion plays and comedy nights, Radosh combines gonzo reporting with a keen eye for detail and just the right touch of wit. Rapture Ready! is an eye-opening survey of a parallel universe and a unique perspective on one of America’s most important social movements.
I heard about this book on a podcast so I thought I'd give it a go. As one who used to be immersed in this culture, I wanted to hear an outsiders perpective. Radosh was respectful but also critical when needed. I found much of what he had to say to be very insightful and downright funny. Here's a passage that cracked me up.
"Cameron Williams is one of Left Behind's main heroes. His friends call him Buck, 'because they said he was always bucking tradition and authority.' The other hero is Rayford Steele, an airline pilot. That's right, Buck Williams and Rayford Steele. There's also Steve Plank, Bruce Barnes, and Dick Burton. Apparently, having a porn star name is enough to keep you from getting rapture."
If you find this hilarious, this book is probably for you. If you are offended by this, stay away. I found it hilarious. I have always felt like a lot of Christian pop culture needed to be made fun of. In fact, I have done that and still do. Many times my art is a jab at the ridiculousness of Christian culture. So, needless to say, I found this book to be very entertaining.

Jim Butcher's the Dresden Files: Storm Front, Vol. 1 by Jim Butcher, Mark Powers, Adrian Syaif.
This is a comic adaptation of Jim Butcher's first Dresden book. I did not like it. The art was fine...nothing special though. The thing that bothered me was the number of typos. I read 3 pages in a row where there were typos. That's some pretty crummy editing. I had to put it down.
Posted by What Would Jesus Glue? at 2:07 PM

Rapture Ready sounds like something I would enjoy. I'll be looking for it.

I also got frustrated with all the typos in the Dresden Files comic. I finished it all the way and enjoyed the story, but what was up with the editing??? How did they miss them all?