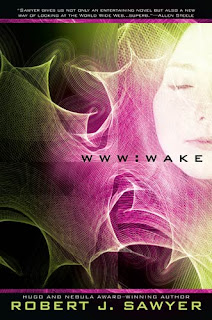 WWW: Wake by Robert J. Sawyer
During his decades-spanning career, award-winning author Robert J. Sawyer has "undoubtedly cemented his reputation as one of the foremost science fiction writers of our generation" (SF Site). Now he adds to his impressive body of work with an imaginative and mind-blowing new trilogy of the web — and its awakening ... Caitlin Decter is young, pretty, feisty, a genius at math — and blind. Still, she can surf the net with the best of them, following its complex paths clearly in her mind. When a Japanese researcher develops a new signal-processing implant that might give her sight, she jumps at the chance, flying to Tokyo for the operation.
But Caitlin's brain long ago co-opted her primary visual cortex to help her navigate online. Once the implant is activated, instead of seeing reality, the landscape of the world wide web explodes into her consciousness, spreading out all around her in a riot of colors and shapes. While exploring this amazing realm, she discovers something — some other — lurking in the background. And it's getting smarter ...

Sawyer is one of my favorite writers of sci-fi. I normally don't like to read hard sci-fi but Sawyer makes it palatable by not forgetting character development. His stories are populated by realistically rendered people.
That said, this book is (in my humble opinion) not one of his best. Perhaps it's the storyline itself that doesn't interest me. An awakening worldwide web sounds intriguing but it barely emerges in this first book of a trilogy. The story of Caitlin is interesting and a side story about a chimp is also very interesting but I found the tech-speak and sentient web stuff pretty unreadable. I'll probably continue when parts 2 and 3 come out just to see how it all plays out. Perhaps as a whole, it will make a better story.
Posted by What Would Jesus Glue? at 4:29 PM