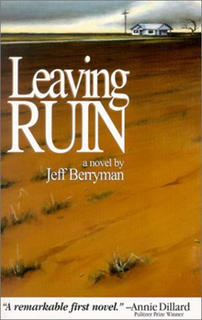 Saw this wonderful one-man show the other night. I was mesmerized. Having been a minister who was "kicked out on his ear" I totally understood where this whole story was coming from. It helped me too. I don't know how but it did. Here's a synopsis of the play.

LEAVING RUIN, a warm, poignant tale of a small West Texas church in the nowhere town of Ruin, centers around Cyrus Manning, preacher for the First Church of Ruin--Church of the Bible. In his eleventh year at First Church, Cyrus has come on difficult times. He and his family--Sara, his wife of almost twenty years, and his two young sons, Wayne and Richard--face an unhappy congregation, with an impending congregational vote on the horizon. Cyrus believes "the nays have it" and he cannot make heads or tails of the situation. A thoughtful, prayerful man, Cyrus grapples for some sense of God's leading. His once vibrant call seems distant, but he wants to serve. Is his ministry over? Must he face a new life, a new home, a new career? And if so, how?

LEAVING RUIN chronicles the tough, often humorous battle of a man chasing the will of God in a time of what seems to be divine silence. Cyrus rummages through memories and old dreams, but the characters inhabiting his past offer no answers, and his frustration is ever on the verge of spilling into a shouting match with the silence. Through his humor, his lament, and his faith, Cyrus wrestles with God, hoping for a break in the silence, hoping finally to hear that elusive word of blessing and affirmation, a word that sometimes comes only with quiet. Finally, he must speak to the congregation. Should he fight, yield, or be silent? A surprising gift offers no easy solution, but Cyrus may yet find the faith and courage he needs to go on.

LEAVING RUIN is a story-telling adventure calling us to love and faithfulness, even in times of God's silence, trusting that His call and wisdom will come, though it may be murky, and not necessarily what we had in mind.
Posted by What Would Jesus Glue? at 5:31 PM