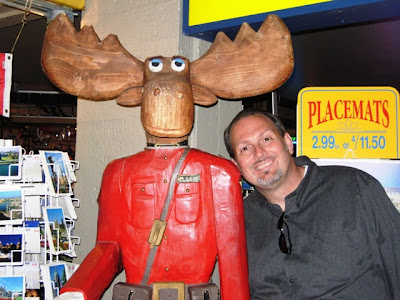 Saturday May 26th 12:05 am
Laid back morning. After chilling for a while, we watched the final of Princess Popstar. Some young chick won singing some Sarah Maclachlan song about angels. It was okay...kind of stupid. She sounded more like Sarah Mac than herself. Most of the contestants took it way too seriously for it to be fun. One lady had a soundtrack for a song she wrote called, "He Really Loves His Beer." She dedicated it to her husband. Classy stuff! And yes, it was a country song. I really wanted the housewife who sang Locomotion to win. She was the only one who didn't take herself too seriously and she had fun with it.
After an afternoon of Scrabble and laying around, we met Steve and Justine for supper at the buffet. All of us are tired of eating at this point. We're just over food. (Except for me and the b'fast buffet...I'm in grits and bacon heaven) We parted ways and readied ourselves for the trek into Victoria. This would have been my first time out of the United States if it weren't for the unscheduled train ride into Canada. Victoria will, however, be the first time I have set foot on foreign soil. I have yet to cross the big water unless you count the Mississippi.
At about 6:45 we stepped into Canada, caught a shuttle bus to the downtown area and spent about 3 hours checking out what Victoria has to offer. We saw the Empress Hotel, the Parliament building, the Inner Harbor and explored a few side streets. It's a pretty cool place. Sarah and I hope to return via the Victoria Clipper. That's a ship that takes you from downtown Seattle to Victoria. It's too convenient not to do it.
Once back on the ship, we met Steve and Justine for late drinks and said our goodbyes. They've been great dinner mates this week. Since Justine wants to move to Seattle, I suspect we haven't seen the last of them.
Tomorrow we wake up at 6:45 am, eat b'fast (one last time - boo hoo), pack and eventually disembark. It's been a great vacation. It went by so slow...it seems like we've been gone a month. What's great is that we have 3 more days off so it's not quite over yet. Back to reality on Tuesday.
Afterthoughts: Not much to comment on about our last day at sea. I'll wrap things up tomorrow with one final entry. Stay tuned.
Posted by What Would Jesus Glue? at 12:48 PM