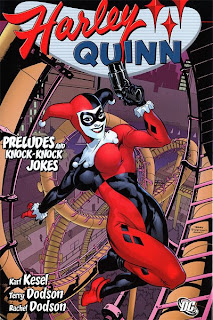 Harley Quinn: Preludes and Knock-Knock Jokes by Karl Kesel, Terry & Rachel Dodson
It's a love story gone horribly, horribly wrong as the Joker's partner in crime takes the spotlight in this lushly illustrated hardcover volume featuring art by Terry Dodson and Rachel Dodson (WONDER WOMAN). There's never a dull moment as Harley bounces from botched schemes to close encounters with Gotham City's kingpins of crime, all the while making wisecracks and acting in the spirit of inspired lunacy.
Grabbed this one on a whim at the library. It had it's moments. The story is so-so. The art is fantastic.
The White Mountains, The City of Gold and Lead & The Pool of Fire by John Christopher
Long ago the Tripods, gigantic three-legged machines, descended upon Earth and took control. They used "Caps," administered ceremoniously near each child's 14th birthday, to control humans' brains and keep them docile. Now there is pleasant life in villages, little technology, and no war--but there is no freedom either. In this powerful and suspenseful series, 13-year-old Will Parker and his friends deal with hunger, humanity, envy, and pride as they struggle to find out all they can about the Tripods and overthrow their rule.*
I had been hearing about the Tripods trilogy for a long while and decided it was high time I tried it. I was lured into reading it thinking it had something to do with H. G. Wells War of the Worlds. It does not other than the author drew inspiration for the alien's transports from it. At first I was disappointed but soon found myself enjoying the story nonetheless. I found the first book to be the least enjoyable due to a lack of dialogue and character development. The second and third books remedied this to a point but the stories do clip along at a good pace. If the characters are walking from here to there, the author tells you this and nothing more. No lengthy passages describing the grass or butterflies or sky. Down to business...wham, bam, thank you maam. I enjoyed the second book the most. In it, we finally meet the aliens and find out about them and their plans. It's very imaginative. I understand that Alex Proyas (The Crow, I, Robot) might take these on as a future film project. Could be good.

*Source
Posted by What Would Jesus Glue? at 8:49 PM