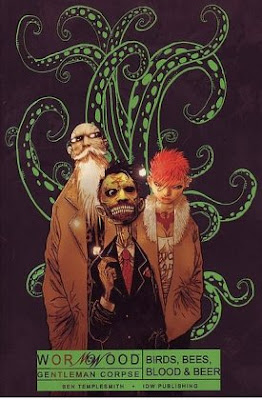 Wormwood: Gentleman Corpse/Birds, Bees, Blood & Beer by Ben Templesmith
Things are awakening in the city. Things that have a nasty habit of leaving mutilated bodies in their wake and it all reeks of demons and dark gods up to no good. Owing a favor to his lazy ghost cop buddy Trotsky, Wormwood, the gentleman corpse and his oddball entourage are brought in to investigate the case (or at least hopefully not stuff it up too much.)
Again, picked this up at the library on a whim. I enjoyed Templesmith's art on 30 Days of Night (the movie sucked) so I thought I would give this a go. It's very dark and very gory so if you're not into that sort of thing, don't read this. The story is simple enough...Wormwood is a sentient worm who uses corpses as host bodies. He investigates macabre, paranormal crimes with his cyborg sidekick and a stripper/assassin in tow. The writing is nothing to write home about...servicable...enough to tell the story. I'm more interested in the art. Templesmith has a unique style that is difficult to pin down. He explains his technique (vaguely) in the book so I know he uses Photoshop quite a bit. It's a cool look.

The Brave and the Bold: The Lords of Luck by Mark Waid and George Perez
Sometimes they fight; sometimes they work together. But one thing's for certain: when the brave and the bold team up, action's never far away!This all-new series of superhero team-ups sees Green Lantern, Supergirl, Batman, Blue Beetle and Lobo joining forces to investigate a weapon that alters probability! Marvel as Supergirl takes on all comers in the gladiatorial arena! Recoil at the horror of Cyborg Batman! Howl with laughter as Lobo and Supergirl spar in the stars! Thrill to the action-packed finale! Superstars Mark Waid ("Kingdom Come") and George Perez ("Crisis on Infinite Earths") have their own team-up to create the last word in thrill-packed superhero action!
Yeah, it's as weird as it sounds. Story-wise, it's a mess and pretty stupid. I checked it out because of the art. George Perez is one of the greatest comic artists there is. He's especially good with team books (Avenger's, Teen Titans). I can't say this is the best art I've seen from him but it's still classic Perez. It's too bad the story is so dumb and confusing.
Posted by What Would Jesus Glue? at 11:26 AM

I LOVE Perez! I admit I got hooked on Teen Titans when he was doing the art for them... You make me want to find this one just to see it. Even if it's not his best work.