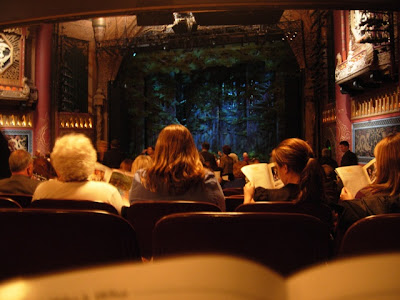 Last night we went downtown to see Seven Brides for Seven Brothers at the 5th Ave. Theatre. We went early to try and catch the snowfall at Pacific Place (they have one of those soap/snow machines) but traffic was terrible due to a stalled car so we only caught the last 2 minutes of the snow. After dinner at Thai Ginger, we walked down the street to see the Macy's star and the city Christmas tree. It's a much better tree this year. Last year's tree was pathetic. Finally, we walked up 5th to the theatre and got our seats. Some girls in front of us were taking pictures and got busted (they were using the flash...losers) so I just had to pull out the camera and snap a pic on the sly. I'm rebellious that way.
The show was okay. I've never seen the movie before so I went in not knowing what to expect. It's an old-fashioned show so it was what it was. It was a good production for what it was. It kills me that Seattle audiences love a good old fashioned show. Weird.
I'll include some more pics in the next entry. Tonight we're going to see the Lost Dogs. I hope to get some pics there too but we'll see. If I'm not near the front it might not be worth it.
Posted by What Would Jesus Glue? at 3:47 PM