The Dreamer and Mrs. Jones 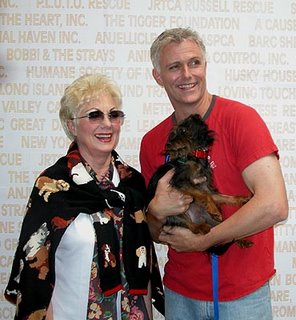 Last night, Sarah and I went to see "Joseph and the Amazing Technicolor Dreamcoat" at the Paramount. (Free tickets...of course) This production stars Patrick Cassidy, brother of David and Sean, son of Shirley Jones. Well, guess who was sitting two rows in front of us? None other than Shirley Jones herself. It was all I could do not to run over to her and say, "I love you, Mrs. Partridge!" I didn't think that would go over too well...especially the lauding her for a 70's sitcom and not her stage and film work. (It's cool...I've seen "Oklahoma" and "Elmer Gantry") I guess since the whole family is in the show (Patrick, his wife and 2 sons) Shirley had to come check things out. I honestly don't know where she lives. Maybe she lives here? Oh...Sarah said something funny on the way out. She said that Shirley must be friends of the family since she was on the TV show with David. I then told her that Patrick was her son. It was one of those "light comes on" moments. Hysterical!
So...how was the show? Well, the first act was dull, flat, and boring. They've changed the staging, set design and costumes and, for the most part, the changes aren't for the better. The sound was terrible. (it got better) Amy Adams (of American Idol fame) was supposed to play the Narrator but her understudy filled in. She was bland. Patrick Cassidy's voice is good but something about it just didn't click with me. He has some weird intonations that rubbed me the wrong way.
The second act got better. The Pharoah/Elvis was great! He stole the show and his costume was leagues above the rest. Overall, I'd say the production lacked a certain energy. It just kind of laid there. They told the story but it had no life to it. The production I saw in Ft. Worth over 10 years ago was much better.
But...I saw Shirley Jones...so life is good.
Posted by What Would Jesus Glue? at 10:41 AM