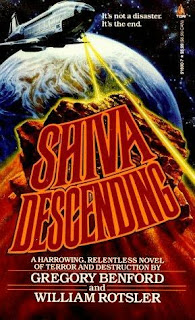 Shiva Descending by Gregory Benford and William Rotsler
"A gigantic asteroid the size of a mountain, Shiva is set to hit Earth with the force of a hundred thousand nuclear bombs, poised to destroy all life on Earth and blast the human race into instant extinction. Only a last-ditch space mission has a chance of saving the Earth--or what's left of it after the first asteroid rainshower."*
I've had this book sitting on the shelf for a long time. I think I picked it up at a Dollar General in SC. Well, I finally got around to reading it. You know what? It's pretty much your standard, garden variety, asteroid-is-going-to-hit-Earth kinda story. It was written in 1979 so I guess it's one of the precursors to Armageddon and Deep Impact. Lucifer's Hammer came first. It was published in 1977 and it's a better story. But, I guess if you like those end-of-the-world type books...and I do...it's worth a read. Just don't expect to be surprised. It's been done and done better.
*Link
Posted by What Would Jesus Glue? at 9:19 PM