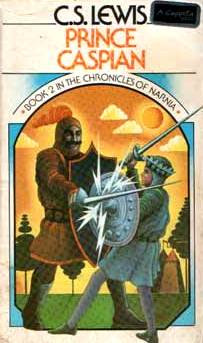 Prince Caspian by C. S. Lewis
"In a dreary train station in England on their way back to boarding school, Peter, Susan,Edmund, and Lucy suddenly feel themselves being tugged into another world. They arrive on an unknown island, where they find the ancient ruins of a palace. But something feels familiar about this place. Eventually the children recognize that they are at Cair Paravel, where they themselves ruled as Queens and Kings of Narnia. They discover that they have been called back to Narnia because the forces of Old Narnia are in trouble. Just one year has passed in our world, but hundreds of years have passed in Narnia. The rightful king, Prince Caspian, is fighting a war against his uncle, King Miraz, who wants to destroy the country of Aslan—the Talking Beasts and trees, the Dwarfs and Fauns—and all memory of Old Narnia. In desperation, Caspian’s forces have blown a magical horn—the very horn Susan once received the last time they were there in Narnia—to summon the Lion and the children to help them in their struggle."*
I thought I'd read this in anticipation of the upcoming film. Having read the story, I know there will be a lot of tweaking to make it a film. I didn't enjoy this story as much as The Lion, the Witch, and the Wardrobe. I think they can improve on the storytelling with the film. We'll see.

The Mist by Stephen King
A mysterious mist envelops a town bringing with it a horde of strange, dangerous creatures. A small group of people trapped in a grocery store must battle the monsters and themselves to survive.
Well, I had just read this book back before the movie came out but after I finally saw the film I thought I'd read it again to compare. I really like the story. It's right up my alley. Apocalyptic survivors and weird monsters. Yes, I know I'm a bit strange. Nothing new there.
There are pros and cons to both the book and the movie. The only problem I have with the book is that David Drayton, his wife's fate unknown, has sex with a woman in the store after only having been trapped for about 24 hours. That didn't ring true to me. The movie has more problems but I liked it anyway. It's a fun ride with lots of thrills and chills. The biggest problem is the ending. Granted, it was a choice made by director Frank Darabont and approved by King himself, but I found it to be a harsh choice. The book ends with a glimmer of hope. The movie ends with none.
*Link
Posted by What Would Jesus Glue? at 9:50 PM

Yes, there's the old-school book cover like my set. None of these movie-tie-in image covers for us!