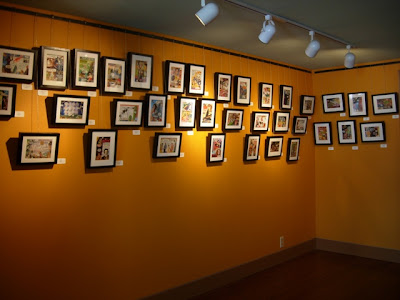 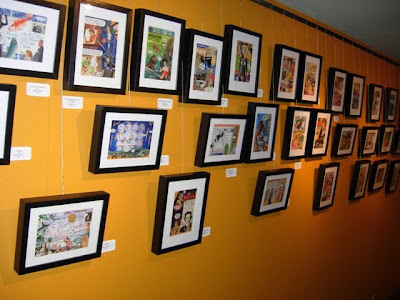 Sarah and I went over to West Seattle on Thursday night for my art opening at Twilight. Before the show we grabbed a light dinner at the Matador. Good food at happy hour prices. The decor there is, according to Sarah, part Spanish mission, part Mexican bordello. At least that's what I think she said. If you had dirtied the place up a bit it could be the set for From Dusk 'til Dawn 4: Vampin' in West Seattle.
After dinner we walked around a bit and stopped at ArtsWest where I am participating in a show next May. They have a really great space. I'm looking forward to that one.
We finally headed back to Twilight. The artwalk started out slow but a pretty good crowd finally gathered. As far as friends, Phyllis, Adam and Heather came by and stayed for a while. We had a good time visiting with them. I didn't have any conversations with anyone about my art but Heather said she heard some twenty-something girls saying they loved my stuff. I told her I didn't want to talk to them because meeting me would ruin their mental picture of what I look like. I actually run into this alot. I don't think most people expect me when they finally see me. What they do expect is something I would dearly love to hear but no one will share that info with me. I think they believe I'll be offended. I wouldn't. I find it all very funny. My guess is that they expect some typical emo/goth twenty or thirty-something wearing skinny jeans, funky glasses and a scarf. I'm sorry to disappoint but it's just me. I guess that emo/goth guy is deep down in me somewhere but I can't dress him. That would be silly.
I really hope I sell a lot of stuff there this month. Erin (one of the owners) said it's been scary slow of late. What with buying gas and food, people just don't have money for art. Oh well. All I can do is keep on working. I'm working towards my next show which is in July at the Bouncing Wall in Upper Queen Anne. It should be fun. The title is a hoot. I won't share it with you now. I'll let it be a surprise. Oh, and I'll post a couple of pics from the show later.
Posted by What Would Jesus Glue? at 1:27 PM

Sorry we couldn't make it. Zak had a thing at school that night. Glad it went well.