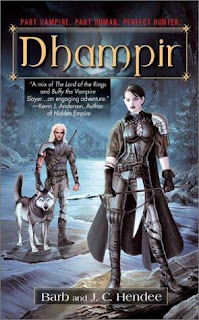 Dhampir by Barb and J. C. Hendee
"A con-artist who poses as a vampire slayer learns that she is, in fact, a true vampire slayer-a dhampir-whose actions have attracted the unwanted attention of a trio of powerful vampires seeking her blood."*
The cover blurb by Kevin J. Anderson said Dhampir was "a mix of Lord of the Rings and Buffy the Vampire Slayer" and he was pretty much right on the money. That sounds pretty lowbrow but I enjoyed it nonetheless. It was better than I expected it to be. The story was pretty standard fantasy/vampire fare but I really enjoyed the characters. Even some of the vampires were fairly pitiable once you knew their back story.
This is the first in a series. Not sure if I'll continue. Perhaps I'll keep it on the back burner for a time when I have absolutely nothing to read. I'm just a bit tired of the whole dark fantasy genre. I need a break.
*Source
Posted by What Would Jesus Glue? at 9:08 PM

hi. i'm beth, becca emery's sister. i started to read this book and it got me so down i couldn't finish it. everything was just. so. major. you know what i mean?