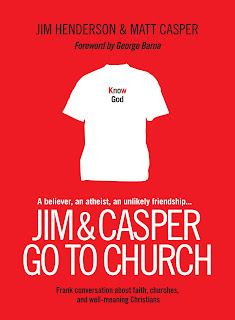 Jim and Casper Go To Church by Jim Henderson and Matt Casper
"Jim Henderson pays people to go to church. In fact, he made national news when he "rented" a soul for $504 on E-Bay after its owner offered an "open mind" to the highest bidder. In Jim & Casper Go to Church, Henderson hires another atheist--Matt Casper--to visit ten leading churches with him and give the "first impression" perspective of a non-believer. What follows is a startling dialogue between an atheist and a believer seeing church anew through the eyes of a skeptic, and the development of an amazing relationship between two men with diametrically opposing views of the world who agree to respect each others' space."*
I finished this book last night before turning in. I found it to be very telling as far as some of the problems churches have trying to be relevant. My favorite thing in the whole book is Matt Casper asking, "Is this what Jesus asked you to do?" Good question.
I agreed with some of their assessments of some of the churches. I have actually been to one or two or have heard their pastor speak somewhere. I disagreed with some of what they said too. That's pretty typical. The one thing that bothered me about the whole book was the cheesy commentary style they used for the dialogue. I hope they really didn't talk like that when they were having their discussions. It made it seem like they were sports commentators up in the booth tossing statistics back and forth at each other. It would make a funny sketch but it wasn't natural. I tried to tune it out and get to the heart of the book.
I really like what they did though. I think most churches would benefit from a random critique now and again. It makes me want to go out and hire an atheist to check out our church. Of course, our church is way in flux right now so they probably wouldn't get a good read on the situation. But it's a good idea to keep churches on their toes.
Heck, hire me to come critique your church. I'll tell you what I think. Mwah-ha-ha!
*Source
Posted by What Would Jesus Glue? at 4:53 PM

This is too funny! Thanks for this review. I hadn't seen or even heard anyone talk about this book. I think I will pick up a copy and after I read it, pass it on. Of course the people I'm thinking of passing it on to will have probably already read it...
-Kim
Seattle Daily Photo