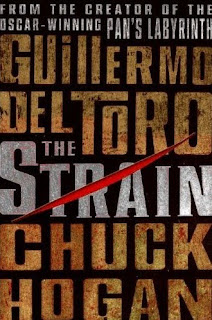 The Strain by Guillermo Del Toro & Chuck Hogan
The visionary creator of the Academy Award-winning Pan's Labyrinth and a Hammett Award-winning author bring their imaginations to this bold, epic novel about a horrifying battle between man and vampire that threatens all humanity. It is the first installment in a thrilling trilogy and an extraordinary international publishing event. They have always been here. Vampires. In secret and in darkness. Waiting. Now their time has come. In one week, Manhattan will be gone. In one month, the country. In two months - the world. A Boeing 777 arrives at JFK and is on its way across the tarmac, when it suddenly stops dead. All window shades are pulled down. All lights are out. All communication channels have gone quiet. Crews on the ground are lost for answers, but an alert goes out to the CDC. Dr. Eph Goodweather, head of their Canary project, a rapid-response team that investigates biological threats, gets the call and boards the plane. What he finds makes his blood run cold. In a pawnshop in Spanish Harlem, a former professor and survivor of the Holocaust named Abraham Setrakian knows something is happening. And he knows the time has come, that a war is brewing . . . So begins a battle of mammoth proportions as the vampiric virus that has infected New York begins to spill out into the streets. Eph, who is joined by Setrakian and a motley crew of fighters, must now find a way to stop the contagion and save his city - a city that includes his wife and son - before it is too late.
Since this has Del Toro's name on it, I had to give it a try. In the end, I found this to be too similar to the story in Blade 2 (another Del Toro creation). It's an enjoyable read but it just seems like Del Toro is rehashing too much. The book starts out as a modern retelling of the classic Dracula story. Eventually it turns into a (spoiler alert) vampirism as virus pandemic apocalypse story that seems all too familiar. There are a couple of CDC folks, a Van Helsing-type character and, for the heck of it, a kick-ass ratcatcher. The books doesn't have an ending because it's part one of a planned trilogy. I'll probably read them all but I won't be in a hurry about it. I'm sure Del Toro could turn this into a visually stunning film but, so far, he says that's not in the plan. The story was originally planned as a television series (hmmm) but was rejected so he decided to put it in print. All in all, I know how creative Del Toro is and I expect a lot from him. It's true that his films are more satisfying in the visual dept. rather than in story but I had hoped Hogan would flesh it out a little more. So, if you like your vampires brutal and bloody rather than shimmery and romantic, give this a try.
Posted by What Would Jesus Glue? at 2:32 PM