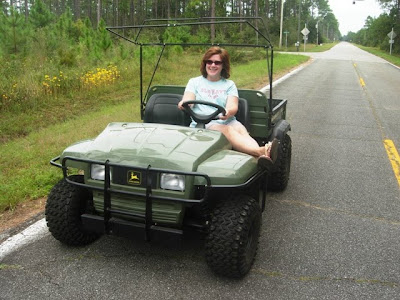 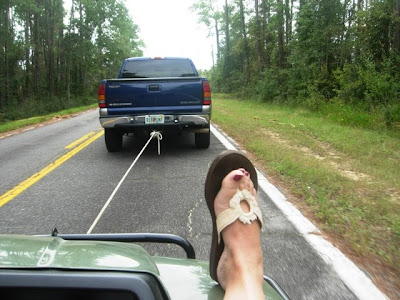 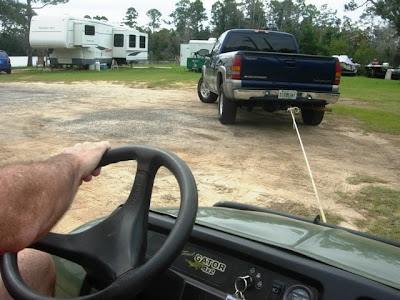 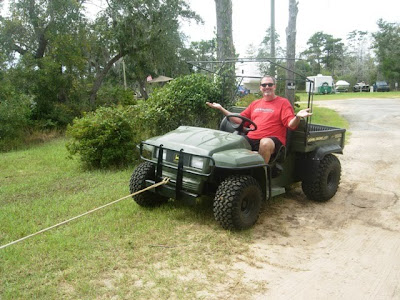 Friday was the day of the Great Gator Adventure.
We slept in and spent a lazy morning around the house. My dad got their Gator (John Deere mini-jeep) ready so Sarah and I could ride it down by the river. He filled the gas tank, checked the oil and rode it around a while to see if it was working properly. It checked out so we hopped on and took off. We rode down to one spot on the river then took off down the road to another spot. About 1.5 miles in the engine sputtered and died. It would not restart. Luckily I had told Sarah to bring the cell phone. We called daddy and he and mama came to get us. He tied the jeep up to the back of his truck. We thought he'd just pull us back to the house but he decided to finish the tour by pulling us to where we had been headed. So, here we are in a mini-jeep being pulled by a pickup truck. People are looking at us like we're nuts but we just smiled and waved like it was the thing to do. I called it Redneck Skiing. At one point I nearly slammed into the back of the truck because daddy decided he had to stop and pick up 3 aluminum cans on the side of the road. "They're worth a penny a piece," he said. Can't argue with that. He pulled the jeep to a neighbor's house for repairs and declared that he thoroughly enjoyed pulling us around. Sarah said it was more fun than just riding the Gator.
Later we headed into Pensacola to meet some friends. We stopped by to see G. C. then headed to Sbux to meet David. We spent the evening with the Randolphs. The kids were thrilled to see us. Charlie had to bring every toy in his room out to show us one at a time. Sadie went on her first "date." (she's in 1st grade) Bridgett came over as well. We told them about the Gator Adventure and they laughed so hard they were crying. It was a fun day.
Posted by What Would Jesus Glue? at 2:10 PM