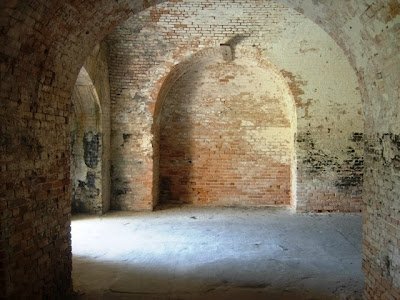 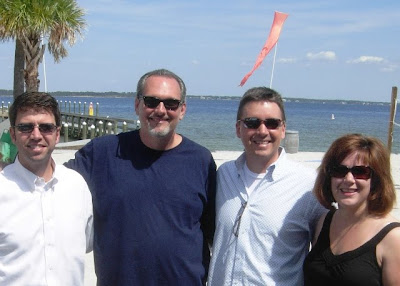 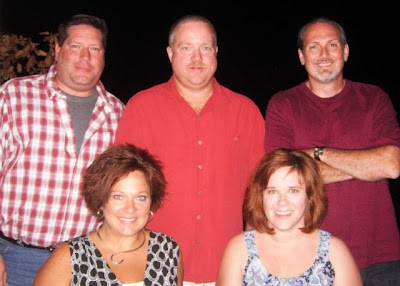 Wednesday found us being lazy. My parents loaded up and headed back to Milton, Cindy and Brian went fishing and Sarah and I lounged around the pool for a little while. We both utilized the $2 float she bought at Alvin's Island. After lunch, we loaded up and headed back to Milton as well.
After hanging around with my parents for a while, we went into Pensacola to meet some old friends for dinner and catching up. We had a great time telling stories from the past and seeing what everybody's up to these days. We were up way too late.
On Thursday, we slept in a bit, then drove from Milton along the water to Pensacola Beach. We met up with Chris and Todd for lunch. It was a great time with more old friends. After lunch, Sarah and I drove down to Ft. Pickens to explore the old forts and hang out on the beach.
After a quick stop to see my cousin Chris, we met my parents and uncle and aunt at David's Catfish House in Milton. By this time we were sick of eating, especially fried food, so we opted to have a garden salad although I did taste my mom's hamburger steak which was good. Uncle Jerry's truck was having clutch problems so we took them back to the house for a bit. Daddy and Uncle Jerry went off in search of a solution (brake fluid fixed the problem) while the rest of us stayed at the house to visit. Once company left, I believe we called it a night.
I'm only posting a few pics here. If you want to see the whole set, I'll be posting them asap on Facebook. If you're not on FB...well, why aren't you?
Posted by What Would Jesus Glue? at 11:18 AM