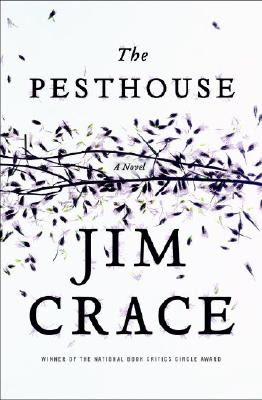 The Pesthouse by Jim Crace
"Once the safest, most prosperous place on earth, the United States is now a lawless, scantly populated wasteland. The machines have stopped. The government has collapsed. Farmlands lie fallow and the soil is contaminated by toxins. Across the country, families have packed up their belongings to travel eastward toward the one hope left: passage on a ship to Europe.
Franklin Lopez and his brother, Jackson, are only days away from the ocean when Franklin, nearly crippled by an inflamed knee, is forced to stop. In the woods near his temporary refuge, Franklin comes upon an isolated stone building. Inside he finds Margaret, a woman with a deadly infection and confined to the Pesthouse to sweat out her fever. Tentatively, the two join forces and make their way through the ruins of old America. Confronted by bandits rounding up men for slavery, finding refuge in the Ark, a religious community that makes bizarre demands on those they shelter, Franklin and Margaret find their wariness of each other replaced by deep trust and an intimacy neither one has ever experienced before."*
This book was slow but the story was sweet and the relationship between to the two protagonists was interesting. I can't say it's the best book I've ever read. I picked it up because I read a review of it that made it seem interesting. It's a critically acclaimed book. Why didn't I like it more? What is it about me that doesn't like the movies and books that critics just rave about? Am I too lowbrow to appreciate the subtle beauty of this story? Was I bored because there was no action? I have no answers to these questions. I guess I'm just one of those people that likes to be entertained. Life pretty much sucks so I enjoy some good escapism. That's probably as good a seque as any into my next book...
The Walking Dead: Volumes 4 and 5 by Robert Kirkman and Tony Moore
"The Walking Dead is an ongoing fictional story centered around a small-town police officer from Kentucky named Rick Grimes, his family, and a number of other survivors who have banded together in order to survive after the world is overrun with zombies. As the series progresses, Rick and the others become more developed, and their personalities shift under the stress of a zombie apocalypse. Fighting growing despair — and occasionally each other — the group searches for a secure location which they can finally call home."**
As usual, a good zombie story is not about the zombies but about the people surviving the zombies. This is a pretty good one. I didn't enjoy these volumes as much as the first 3 but they were okay. Be warned: they are pretty graphic. Volume 5 had a particularly gruesome torture scene that I ended up skipping past. (and nothing bothers me) I'm hoping the library gets Volume 6 so I can find out what happens next.
Ultimate Spider-Man Vol. 1: Power and Responsibility by Mark Bagley and Brian Michael Bendis
This book reimagines the story of Spidey from the beginning for a more contemporary audience.
This series was recommended by a friend but I didn't care for it too much. The reimagining was too "hip" to be clever. The older I get, the more I appreciate the comics of my youth. Sure, these new comics boast better writing and better art (in some cases) but they lack a certain innocence...a naivete that worked. Don't get me wrong...I love some of the new, dark comics but a part of me longs for the simple stories of yesteryear. I guess I'm just getting nostalgic in my old age. I think it eventually happens to everybody. SIGH!
*Source: powellsbooks.com
**Source: wikipedia.com
Posted by What Would Jesus Glue? at 12:15 PM